What if there was no fear?

Conspiracy myths
"That makes you laugh"

Fear of losing control makes people more susceptible to conspiracy ideologies - the corona pandemic is therefore the best prerequisite for this. In an interview, political scientist and network activist Katharina Nocun explains how one should react when one encounters conspiracy believers.

Ms. Nocun, together with Pia Lamberty you wrote a book in April 2020 with the title “Fake Facts. How conspiracy theories guide our thinking ”published. In it, however, you do not speak of conspiracy theories, but use the terms “conspiracy myths” or “ideologies”. Why?

Theories are a scientific concept. It is assumed that as soon as one theory is demonstrably wrong, the other withdraws or adapts it. But that is exactly what does not happen with conspiracy ideologues. Conspiracy myths are narratives in which people believe there is a collusion between people or groups who are perceived as powerful. A certain competence and power are ascribed to the alleged conspirators. Socially disadvantaged and marginalized groups can also be at the center of such narratives, as was the case with the anti-Semitic pogroms at the time of the Black Plague in the Middle Ages. It is also important that the conspirators are assumed to have malicious intent to consciously harm others. 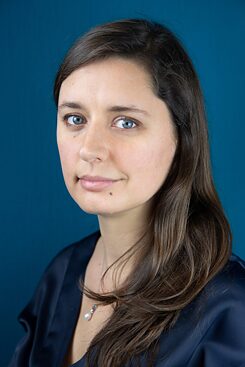 Katharina Maria Nocun is a network activist and publicist. She blogs at kattascha.de and runs the podcast "Denkangebote". In 2018 her first book “The data that I called” was published. Her book “Fake Facts. How conspiracy theories determine our thinking ”was published in 2020 by Quadriga-Verlag. | Photo: © Miriam Juschkat How do you know that it's not actually a conspiracy?

There are also real conspiracies. In a democracy you have to look carefully at what secret services and governments are doing, what is going on in politics and the economy. The decisive factor is whether I have a claim to truth and can substantiate my opinion with facts, or whether it is an ideology, a closed worldview. It makes a difference whether I discuss hypotheses or whether I fall into a belief model.

When are people particularly prone to believe in conspiracies?

When people feel that they are losing control - for example in the event of a job loss, political upheaval or a global pandemic - they are more inclined to believe in conspiracy myths. There are studies on this. The conspiracy myth can then be a kind of auxiliary construct. The view of the world is not necessarily rosy, but it does give the believer the feeling that there is a structure, a plan, and clear guilty parties to point the finger at.

What are particularly popular narratives?

Many conspiracy myths are circulating, especially in the medical field. When someone claims that vaccinating is dangerous, conspiracies are often used as an explanation. Some of these stories assume that there is a worldwide conspiracy of millions of medical professionals who have colluded to harm the world. It's not about facts, it has nothing to do with reality. But this leads, among other things, to the fact that people generally mistrust doctors and, as a result, they prefer to consult the faith healer even with serious illnesses. Such anti-scientific attitudes can be fatal.

Is the Internet reinforcing such trends?

A common prejudice is that conspiracy narratives are given a boost in the first place by the Internet. But during the Nazi era, the majority of the population believed in the myth of the Jewish world conspiracy, that is, in a clearly anti-Semitic conspiracy narrative. That was the government's opinion and was taught in schools. Back then there was no internet. In fact, the phenomenon has become more visible through new media, and of course such narratives emerge and spread digitally faster.

How is it that such a worldview becomes so real for some?

Conspiracy believers perceive the world a little differently. Most of us have an expert bias: We put more trust in those we believe to be experts. Studies have shown that conspiracy believers have a less pronounced expert bias and, in extreme cases, they believe in their neighbors as much as they do in an internationally recognized expert.

How should one react to conspiracy beliefs on the Internet?

Counter-speech should be made immediately in social networks and group chats. In the case of racist and anti-Semitic announcements, one should clearly say: “Up to this point and no further!” This is very important, because conspiracy myths also stir up hatred against people, which can have dire consequences. Silence is often interpreted as consent.

What do you mean specifically by “bad consequences”?

Many right-wing extremist assassins in recent years - in Hanau, Halle, also in Christchurch (New Zealand) - believed in conspiracy narratives and thus justified their murders. Conspiracy myths have been shown to be central to mobilizing the radical right. This must also be seen as a systematic problem, it must be taken seriously. Conspiracy ideologues specifically target people. We now see that in the context of Corona. When scientists receive death threats, it makes them less willing to speak out in public. That is no enrichment for a balanced technical debate.

What if friends suddenly utter such thoughts?

Fact checks can help - there are very good ones around Corona. A one-to-one conversation is also useful and perhaps the question: “How are you actually?” The feeling of loss of control has ultimately been proven to lead to some people suddenly believing things that they would otherwise not believe.

Can I reach someone who is absolutely convinced of a conspiracy?

It is difficult to get through to people who are already deeper into this parallel world of information and think, for example, that there is a global science or press conspiracy. Fact checks then come from precisely those actors who are seen as part of the conspiracy. Advice centers advise you to work with questions at this point: “Have you checked that? Why do you think this medium is more serious than another? ”- and thus to encourage the other person to question the respective assumptions. Ideally, this can help stop or slow down radicalization. Often the belief in one conspiracy leads to belief in another conspiracy and at some point the result is a self-contained worldview that is characterized by a black and white view.

That would be the “aluminum hat carrier” category, which for some people is also entertaining.

People like to laugh about the myth of chemtrails, which are supposedly not aircraft contrails, but substances that are supposed to poison us. But how funny is that for a child who is no longer allowed to go out as soon as a contrail can be seen in the sky because the parents believe something like that? You live in constant fear. At first, people always want to hear the funniest conspiracy stories - no more after talking about the background and consequences. Because if you take a closer look at it, you will lose your laughter.

Where can people seeking advice - those affected or their relatives - find help?

At the moment, many are turning to cult counseling centers, as a number of cults spread conspiracy myths in order to bind their members to themselves. The mobile counseling service against right-wing extremism also provides advice on these issues. But there are far too few such places and they should be better equipped. Better funding is also needed for associations that work on this topic.

What should the state institutions do?

Schools should systematically put the topic on the curriculum. Young people come into contact with it sooner or later and should learn to recognize and deal with conspiracy narratives. Psychological education would also make sense: If I know that I am more vulnerable in this or that situation, it can sharpen my inward view, so that I first sleep on it for a night before I share my views in the chat. Personally, I would like the state to have a uniform master plan and strategy - and more money for research.