Antimatter and antiparticle are the same

Fundamental questions - what is antimatter, or: why is there not just nothing? 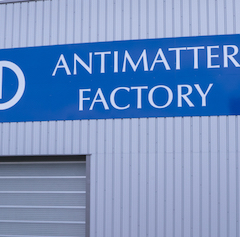 It really does exist: In the "antimatter factory" at CERN, particles are decelerated, combined to form antimatter particles and examined. Image: CERN

Almost inexhaustible energy supplier and rocket propulsion, highly explosive explosives with enormous destructive power or the stuff that the evil twin worlds are made of: Antimatter has stimulated people's imagination since its discovery. Although many of the ideas are very far removed from what is physically possible, antimatter is also a fascinating topic for particle physicists. For their existence and properties raise truly fundamental questions: Why does the universe exist, why does it exist, why is there anything at all? Because according to everything that physicists have known so far, there should really be nothing.

But first to the basics: Antimatter could be described as a kind of mirror image of normal matter. For every particle there is an antiparticle, for example the positron as an antiparticle to the electron or the antiproton as an antiparticle to the proton. There are also anti-atoms, for example anti-hydrogen from an antiproton and a positron. Particles and antiparticles only differ in that their charges (for example the electrical charge) or, more precisely, their charge-like quantum numbers are opposite. While the electron is known to be electrically negatively charged, the positron is accordingly positively charged. Other properties such as the mass are exactly the same (as far as known so far). In 1928 the physicist Paul Dirac predicted the existence of antimatter for the first time on the basis of theoretical considerations; positrons were detected as the first antiparticles in 1932, i.e. 75 years ago. And antimatter is still being researched more closely to this day.

Antimatter isn't as exotic as one might think; it arises, for example, during radioactive decay. The body of a person who weighs 80 kilograms emits around 180 positrons per hour, which are created when a certain isotope in the body decays. Or it comes from space: tiny amounts of antimatter constantly rain on the earth in the form of cosmic rays. And positrons have been used in medical diagnostics for a long time; PET, i.e. positron emission tomography, is an important imaging process for which positrons are used.

It gets exciting when particles and antiparticles collide: then what is known as annihilation occurs, the pair annihilating each other in a concentrated flash of pure energy. This is what makes antimatter so fascinating for science fiction literature. There the extinction of matter and antimatter is then used either as a dangerous weapon or as a source of energy. The problem with this is that the antimatter would first have to be generated in a complex manner - which requires significantly more energy than is obtained later. With today's technology, producing even a few grams of antimatter would take billions of years. And even then the problem of how this antimatter should be stored for so long would not be solved - after all, it must not come into contact with normal matter, otherwise: see above.
Annihilation is actually used in particle accelerators that allow electrons and positrons to collide. From the energy that arises when the pairs are extinguished, new particles are formed which can then be examined. This is significantly "cleaner" than the collisions of particles such as protons, which are made up of even smaller particles. A large number of particles are created in such collisions, most of which are of no interest to researchers.

Just as particles and antiparticles dissolve into energy on contact, new particle-antiparticle pairs can arise from energy. Shortly after the Big Bang, the very hot and dense universe was in equilibrium between the creation and annihilation of particle-antiparticle pairs. A few moments later there was only annihilation because no new pairs were formed in the somewhat "cooled" universe. To be more precise: the energy density was no longer high enough for the energy to generate new mass. One result of this annihilation process are the photons of the cosmic background radiation, which can still be measured today. Actually, there should only be energy left, since all couples should have destroyed each other. Obviously there is a lot of matter and apparently little antimatter in the universe today. Measurements show that for whatever reason an additional particle of matter must have formed for every billion particle-antiparticle pairs. That doesn't sound like much, but it was enough to make up the entire universe as we know it. An asymmetrical process in the early days of the universe must have caused this preponderance. However, the processes of the Standard Model that come into question are not sufficient to explain the excess of matter.

Therefore, various experiments are concerned with researching how the imbalance could come about. At the LHC, the LHCb experiment examines the asymmetrical decays of certain particles (the so-called B mesons) and looks for differences in the formation of matter and antimatter. Small differences have already been found, but they are not enough to explain the imbalance. There is a similar experiment in Japan, for example, at the SuperKEKB accelerator, the Belle II detector in particular will soon also examine such B mesons.

In addition, there is a whole antimatter "factory" at CERN. The antiproton decelerator (or antiproton decelerator, AD for short) is used to capture antiprotons and slow them down to such an extent that they can be examined in detail. The antiprotons are produced by shooting protons at a metal block at almost the speed of light, which then also creates a few antiprotons. Various experiments at the AD investigate the properties of these antiprotons or even of anti-hydrogen atoms very precisely in order to perhaps find a difference to normal matter. The slightest difference in properties could be an indication of how the imbalance came about. So far, however, the result of the measurements on the AD has always been perfect symmetry.

The facility at CERN will soon be expanded. The Extra Low ENergy Antiproton ring, or ELENA for short, is to be connected to the AD this year. ELENA is a small decelerator ring designed to slow down the antiprotons even further, allowing more of them to be examined. The first experiment that ELENA will do research is called GBAR and deals with the effects of gravity on antimatter. Because so far it has not been possible to investigate how gravity affects antimatter. Maybe it will fall up? (In the opinion of most researchers: not really.)

Other experiments investigate another theory: these researchers are looking for antimatter atoms in the universe. If they found antisilicon atoms, for example, that could be an indication that another process after the Big Bang caused so much matter to exist: particles and antiparticles could have separated, which is now large in another part of the universe There are amounts of antimatter that could form entire antimatter galaxies. Still other experiments deal intensively with neutrinos and investigate whether they could be their own antiparticles - according to certain theories, the decay of previously undiscovered, heavy neutrinos could be responsible for the imbalance. To do this, neutrinos would have to be their own antiparticles.

So antimatter is probably not the key to future energy supplies on earth, but it may be the key to solving an even more existential question. And even if there are perhaps no antigalaxies with anti-doppelgangers from us - antimatter could tell us a lot about us and nature.