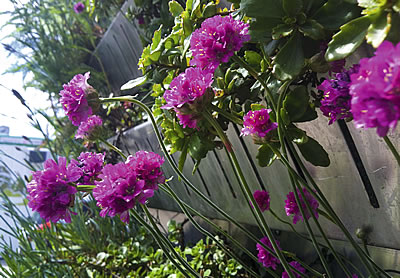 The urban microclimate is understood to mean small-scale climatic conditions, which have a direct effect on the city dwellers. It can vary greatly over a short distance. Think of a street in summer, half of which is in the light and the other half in the shade, or of cool inner courtyards. For the formation of the microclimate are essentially responsible for the following factors:

While the Exposure to sunlight and the Wind force Depending on the general framework, it is in the hands of the planners and the authorities Surface properties and to define the arrangement of the building structure. So that can Microclimate can be significantly influenced, and even controlled, since the energy balance and air exchange of a city quarter are dictated by the building structure, their composition and their mutual arrangement.

When sunlight (global radiation) hits the building surface, various processes occur. Global radiation can enter the body depending on the material properties and the structure of the building envelope penetrate, be reflected or help to heat its surface. Depending on the surface temperature, the environment heats up. This heat is called "sensible" or sensible warmth designated. Thermal insulation of buildings means that surfaces heat up particularly strongly and a lot of sensible heat is also generated.
The warmer a surface, the more long-wave radiation it emits. The surface temperature can, for example, be measured and displayed with the help of thermographic recordings. High surface temperatures can affect humans thermal discomfort which can also cause stress and circulatory problems. In an urban context, the properties of the buildings lead to the described processes Overheating, the so-called urban heat island ("Urban Heat Island"). This phenomenon particularly affects densely built-up, heavily sealed districts with little green space.

In contrast to “normal” urban surfaces such as building walls, roadways or sidewalks, surfaces made of plants react active on the prevailing weather. If global radiation hits a plant, it starts photosynthesis. In order to be able to operate this, the plant carries out gas exchange: it absorbs CO2 and releases oxygen - but not only that! Plants also perspire, they "sweat". The water present in the plant is evaporated and released into the environment.

This has three positive consequences for the urban microclimate: First of all, energy is required to convert water from the liquid to the gaseous phase. This energy is withdrawn from the environment and cools them down. Everyone knows the effect of evaporative cooling, which causes us to suddenly shiver after bathing in summer.
But the plant also cools itself. Their surface temperature is always in the range of the air temperature and consequently causes only small additional sensible heat flows. As a result, this contributes to our well-being.
The third positive effect of transpiration from plants is one Increase in humidity. This also leads to increased comfort.

Investigations by the Institute for Biological Engineering and Landscaping at the University of Natural Resources and Life Sciences, Vienna have shown that the The cooling capacity of the plants interacts perfectly with the air temperature.

That is, the plants cool the most, when we need it most urgently - during heat waves. A green facade in Vienna with an area of ​​around 850 m² provides roughly the cooling capacity of 75 air conditioning units with an output of 3000 W and an operating time of 8 hours on a hot summer's day.
So there is a lot to be said for increasing the use of plants in order to improve the energy balance and the microclimate of highly dense urban districts and thus the Quality of life and health of their residents.

The vast majority of the surfaces in European cities is sealed. Around half of all sealed surfaces are traffic areas for moving and stationary traffic as well as for cyclists and passers-by. These areas are mostly made with asphalt or concrete pavements. Especially the areas of the sidewalks, bike paths and inner courtyards could go through alternative fixings, such as paving, slabs, grass pavers and permeable ceilings made of glued precious chippings, aesthetically high quality, ecological valuable and resource-saving be designed. 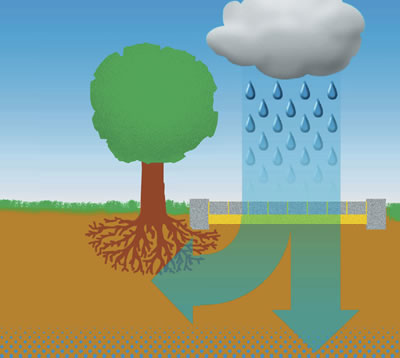 Sinkable surface fastenings allow soil-air-water exchange. This means that they are able to absorb, buffer and infiltrate precipitation. This has the effect of relieving the sewer system and is therefore one of the passive flood protection urban spaces. The seepage of precipitation ultimately also leads to a renewal of the groundwater. The air exchange allows a natural soil life, which is of great importance for the purification of rainwater. In contrast to sealed surfaces, the layers of soil underneath remain fertile.
Some infiltratable surface pavements can be made with suitable grasses and herbs greened become. This increases you Water retention capacity (Interception, perspiration) and they form an important one habitat for other plants (succession of species) and animals. 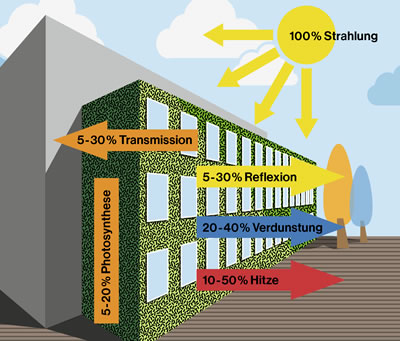 The urban temperature and radiation budget

The surface temperature is basically the expression of the amount of long-wave radiation that is emitted by urban surfaces, for example. It is therefore crucial for the urban heat balance how much global radiation arrives and is subsequently reflected, absorbed or converted into long-wave radiation.
In Metropolitan areas There is a change in the radiation budget due to air pollution and the changed surface properties. The Haze bell over central European cities causes a reduction of the incident global radiation by 10% compared to the surrounding area (HENNINGER 2011, HORBERT, 2000).

The reflection or albedo of closed urban areas is to be assessed very differently because of the variety of materials and the different inclined surfaces. Dark surfaces, but above all the multiple reflections between buildings, lead to a reduction in the albedo.
The remaining long wave radiation between the urban canyons contributes to the increase in temperature.