What is actually typically Portuguese? In search of the only true truth, you will find out here all the common prejudices and clichés that characterize a typical Portuguese. 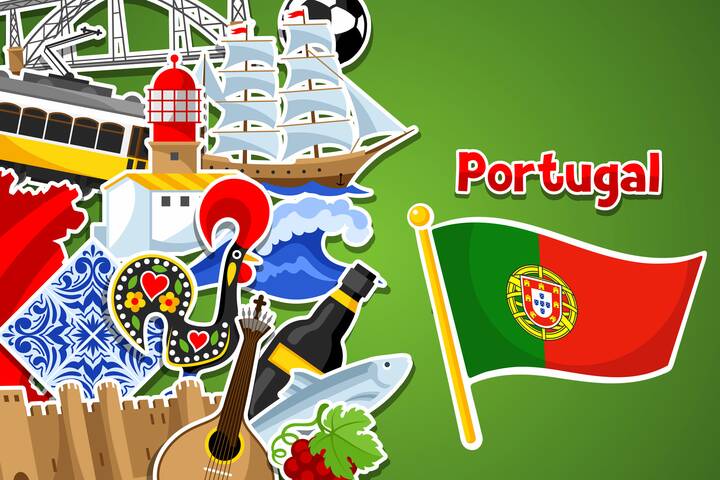 Portugal? I know it very well

Well, most Germans know about as much about Portugal as they do about Iceland or the Ukraine - but as a teenager you accompanied your parents on a beach holiday there, of course you've heard a lot and you can guess the rest. Portuguese are actually Spaniards who speak a slightly different language. Even if it is necessarily more oriented towards the Atlantic, Portugal is one of the Mediterranean countries suitable for holiday destinations. And that with all the consequences that arise from it. Sun, warmth and sand are everywhere. You are welcome to take part in building well-functioning thought traps and clichés about Portugal.

Here you will find further evidence of the veracity of almost all prejudices that circulate about the country. As numerous as the grains of sand on the Portuguese coasts, which are lined with dream beaches without exception. And since they wouldn't be prejudices otherwise, they naturally affect all Portuguese without exception - regardless of whether they live in Lisbon, Porto, Madeira or the Azores.

Portuguese are generally melancholy, nostalgic and sing or play fado in the evenings. They are also elegantly dressed, men in tight trousers and white shirts (frills!), Women in long dresses or skirts, then complemented by (frilled!) Off-the-shoulder peasant blouses. Exactly - then sad guitar music and plaintive, soulful vocals. That is typically Portuguese and every tourist can convince himself of it in the country of the former explorers and conquerors at night in the relevant bars.

During the day, the Portuguese tend to eat little and smoke all the more. Instead, he feasts on oily sardines, port wine and vinho verde in the evenings. Beautiful, elegant and self-confident Portuguese women look proud and defiant and get the pale blood that is ready for vacation even in Central European tourists.

Unfortunately, many Portuguese women have mustaches and all Portuguese are very woolly anyway. At first glance, this knowledge is not confirmed, but if you looked long enough in the hinterland, you would surely find a mustached grandmother and a few hairy natives who confirm this fact. In the tourist cities, in the bars and on the beaches, however, the hairy Portuguese have become a rarity.

Punctuality is an ornament ...

The fact that the Portuguese are not as strict about punctuality as their German guests contributes to the relaxed holiday mood. Everything is a little more relaxed, the waiters don't roll over and the city tours don't gallop past the sights. Note: Abroad, delays are exotic and at most upset inflexible philistines who always ask first about the German baker or butcher.

As an enlightened traveler, you can simply ignore the fact that, in contrast to its big Spanish brother in Portugal, the tradition of the siesta does not really exist, after all, holidays are one long lunch break anyway. If the service staff works hard, that makes the siesta a little more comfortable for the tourists.

All Portuguese love bullfighting and football. In the fight against the horned muscles from biological and animal-friendly rearing, the Portuguese wild guys can use their excess testosterone decoratively and sensibly - well-trained, elegantly dressed and strong-willed young heroes force the unrestrained elemental force of the bulls on their male will and show themselves in the best light. The noble, aloof femininity looks carefully to identify those who might be worthy of her ardent devotion and heartfelt love. Tourists shudder, the men can attribute their role as spectators to the lack of training, the women are secretly happy not to see their partners exposed to this danger; this would make the vacation too adventurous.

But there is still football! All boys want to be like Ronaldo one day, which is why they train from an early age, regardless of their schooling, from morning until late at night on every corner of the house with the round leather. Those who have not been granted public recognition as the god of football continue to play undeterred or opt for the only insignificantly less active role of football fans. Seldom does Portuguese national pride manifest itself more uniformly and more powerfully than in the ranks of the football stadiums.

Almost everything in Spanish

Even so, it is obvious that the Portuguese are something like Spaniards. Visually indistinguishable, living on the same peninsula in the European south-western outback and being extraordinarily Catholic, Portuguese and Spaniards speak Romance dialects, feed on wine, olive oil, ham and small, greasy fish. You are not shy about work, but you know how to set priorities.

Here and there they decorate their houses with azulejos, the typical Portuguese colored ceramic tiles. In the evenings there is always and everywhere music, with the real Spaniards dancing the flamenco, the more introverted Portuguese, however, directing their wildness inwards with fado and getting intoxicated with their own barely restrained melancholy to gloomy guitar music.

As a benevolent and impressed observer, you have no choice but to order sweet wine and indulge in the hot summer night with sizzling eroticism.