A Champions League is now a good form in the world of team sports. Cricket is no exception. The Twenty20 Champions League - the premier class - is currently taking place in India. It is almost taken for granted that the winner will come from the host's country. Because in the cricket world, the subcontinent is now the clear number one, especially financially.

This article is older than a year.

The Twenty20 Champions League, which was launched in 2009, is staged for the sixth time. While teams from England, the motherland of cricket, also took part in the first editions of the Champions League, the number of participants is now limited to teams from countries where cricket is still far more popular than football. In addition to India, this year teams from the cricket strongholds of Australia, New Zealand, Pakistan, South Africa, Sri Lanka and the West Indies were at the start.

The first edition five years ago was won by the New South Wales Blues from Australia, two years ago a club from "Down Under" also surprised with the Sydney Sixers. But this year anything but a victory for a club from India would be a sensation. Even if the two-time and thus record winner and defending champion Mumbai Indians failed in the qualification this year, the remaining three clubs - the Kolkata Knight Riders, the Chennai Super Kings and the Kings XI Punjab - dominate the event almost at will. 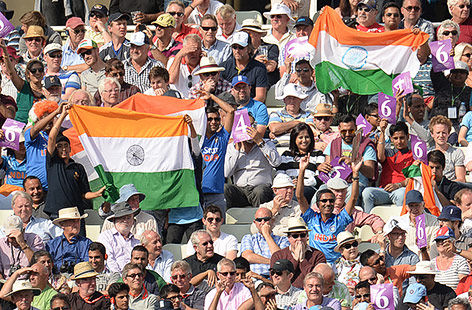 In India, cricket is the number one popular sport and the stadiums are always full

The dominance of the Indian teams is not only due to the popularity of the game on the subcontinent, but also to the financial power. Because when it comes to money, India has long since overtaken the other nations of the cricket world. The total value of the eight clubs in the Indian top league - the Indian Premier League - is given as almost three billion US dollars (around 2.4 billion euros). And the best four also mix up the Champions League.

The money is being pumped into the subcontinent primarily from TV stations. The US broadcaster ESPN put no less than 900 million dollars (around 710 million euros) on the table for a ten-year contract with the Champions League. The sum was only slightly below that which the Indian Premier League pocketed - here, the TV companies let the broadcasts of the top division cost a little more than a billion dollars.

"Our most important market"

And these investments also pay off. Because nowhere in the world is there so much cricket being watched on TV as in India. And the Europeans, especially the English, know that too. "India is our most important market in Asia," said Andrew Walpole, head of communications for the England and Wales Cricket Board (ECB), which is clearly overshadowed by the Indian league with an annual turnover of 78 million euros.

Even the international match The Ashes between England and Australia, which has been held in traditional cricket format for several days since 1882, must tremble for its status as the flagship of the ECB. "India is as important to us commercially as The Ashes," said Walpole, "even if The Ashes are still very important, they will have competition with a series against India next summer." According to Walpole, the ECB gets up to 75 percent of theirs TV money income, and "India is simply the most important market". 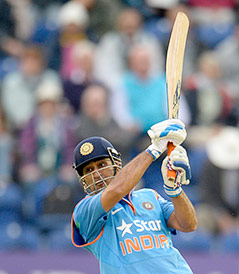 The sponsors of the Twenty20 Champions League know that too. Because they are generous in the premier class of the short version of the formerly elite sport: The Indian telecommunications giant Airtel bought in 2009 for 40 million dollars (32 million euros) per season, meanwhile the rights went first to Nokia and finally to Karbonn Mobiles, both mobile operators , above. Exact figures are not known, but one can assume a full increase in rights costs.

Nevertheless, the funding of the tournament is modest compared to the football Champions League, for example. A total of six million dollars (4.7 million euros) will be played. Just getting into the group stage brings a football club six million euros. The winner of the Twenty20 league can look forward to around two million euros. For comparison: In football alone the final win brings 10.5 million euros - not counting bonus points in the group phase and promotions in the knockout round.

Millions of dollars for three weeks

For the players themselves, a commitment in the Champions League is much more lucrative thanks to the financial strength of the individual clubs: Sunil Narine from Trinidad and Tobago, superstar of the Kolkata Knight Riders, won 1.6 million dollars (1.26 million euros) . Mahendra Singh Dhoni, a cricket legend in India, even brought it to 3.1 million (2.45 million euros) in the three weeks. The South African David Miller also received a princely reward of 1.7 million euros for his appearance for the Kings XI Punjab.

The cricket stars don't have to hide from top soccer earners like Lionel Messi and Cristiano Ronaldo. Because the salaries listed above are only the salary for the three-week tournament. Dhoni, who led India to the 2011 World Cup in one-day cricket and has 20 sponsorship deals, collects around 30 million dollars (23.7 million euros) a year. This means that the Indian is on the traditional "Forbes" list on the 22nd highest paid athlete in the world.