What is Operation Trishul

India and China end pirate kidnapping in the Gulf of Aden 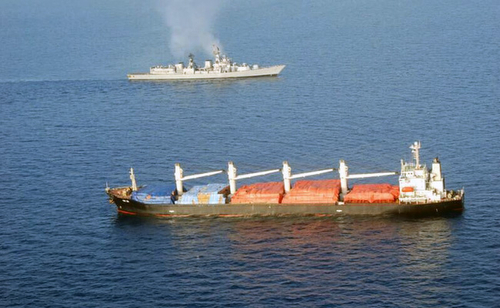 Naval forces from India and China ended an attack by presumably Somali pirates on a merchant ship in the Gulf of Aden at the weekend. Warships and helicopters of the Indian Navy rushed to the bulk carrier OS35, flying the flag of Tuvalu to help after a pirate attack on Saturday (yesterday). Soldiers from a Chinese warship then ensured that there were no more pirates on board. The incident marks the fourth alleged Somali pirate act in a matter of weeks after years of inactivity.

From the message from the Indian Ministry of Defense:

A distress call was received from a foreign merchant vessel MV OS 35 (Tuvalu registered vessel), which was attacked and boarded by pirates in the Gulf of Aden late night on April 08. Indian Navy ships Mumbai, Tarkash, Trishul and Aditya proceeding on deployment to the Mediterranean and passing through the Gulf of Aden, responded to the call and rapidly closed the merchant vessel by the early hours of 09 April. The Indian warships established contact with the captain of the merchant vessel, who along with the crew had locked themselves in a strong room on board (citadel), as per standard operating procedure.

An Indian Navy helicopter undertook aerial reconnaissance of the merchant vessel at night, and at sunrise, to sanitize the upper decks of the merchant ship and ascertain the location of pirates, if still on board. Emboldened by Indian Navy's helicopter cover, and on receiving the 'all clear signal' that no pirates were visible on the upper decks, some crew members gradually emerged from the strong room and carried out a search of the ship and ascertained that the pirates had fled the ship at night. Subsequently, in a show of international maritime cooperation against piracy, a boarding party from the nearby Chinese Navy ship went on board the merchant ship, while the Indian Naval helicopter provided air cover for the operation. It has been established that all 19 Filipino crew members are safe. The Captain of the merchant vessel profusely thanked the Indian Naval ships for their response and for providing air cover.

According to a report in the Indian newspaper Indian Express was the Chinese frigate Yulin involved in the action. It is unclear when and how the pirates fled. In this case, however, the value of a secured room on board, the so-called citadel, was shown (again), in which the crew can hide and wait for help in the event of a capture.

Since March of this year, there has been increasing activity by pirates from Somalia. Among other things, a dhow was hijacked, the crew of which was largely released - this ship could possibly be used as a mother ship for attacks.

The fact that the Indian and Chinese navies became active in this case is partly a coincidence, but also a sign of the reduced presence of the naval forces of western states. The European Union hopes to launch its anti-piracy mission Atalanta (with German participation) to be able to end in the coming year. From the EU mission there was only a brief notification of the latest incident on Saturday evening that the relevant information would be checked.

(Photo: the Indian destroyer Mumbai, in the foreground the freighter OS35 - Indian Navy)