How is sponsorship different from advertising?

Sponsoring is now one of the established instruments in the company's communications mix. The first sponsorship engagements can already be found in the 1960s as a form of surreptitious advertising at sporting events and in the 1970s as a form of sports advertising. Professional sponsorship has only been spoken of since the 1980s. Since then, sponsorship has developed continuously and new forms have been added. It is often assigned to the area of ​​live communication with other communication instruments (e.g. trade fairs).

Sponsoring has gained in importance faster than any other communication tool, both in Germany and worldwide. In 1985 companies in Germany spent around EUR 120 million; in 2008 they were around EUR 4.6 billion. Due to the economic crisis, there was a decrease in expenditure from 2009 to 2011 to 4.2 million euros. After that, expenses began to rise again and amounted to 5.5 billion euros for 2016. This trend can also be seen in global sponsorship spending. In 2014 they were $ 55.3 billion, of which $ 20.6 billion was spent in the United States alone. The striking growth continued with US $ 60.2 billion in 2016. The importance of sponsoring as a communication tool in Germany is also reflected in the high proportion of sponsoring in total expenditure, which amounted to 12.4 percent in 2013. The enormous growth rates in sponsorship can mainly be attributed to changes in the communication and media markets and their consequences (e.g. information overload, reactance effects), which create problems with classic communication instruments such as media advertising.

Sponsoring means the analysis, planning, implementation and control of all activities that involve the provision of money, material resources, services or know-how by companies and institutions to promote people and / or organizations in the fields of sport, culture, social affairs, the environment and / or are connected to the media under contractual regulation of the sponsor's performance and consideration from the sponsored, in order to achieve marketing and corporate communication goals at the same time. The principle of performance and consideration distinguishes sponsoring from other forms of corporate support such as patronage and donations.

A distinction can be made between economic and psychological objectives.

The focus is on sales and sales targets as well as increasing brand values ​​and market shares. However, cause-and-effect relationships cannot be derived directly from these goals, so that they often only play a subordinate role in practice.

Increasing brand awareness, image profiling, addressing special target groups and increasing employee motivation and identification are particularly important. In social and environmental sponsoring in particular, demonstrating a sense of responsibility and achieving goodwill are central objectives. In recent years, relationship-oriented goals that promote personal contact with important corporate target groups and promote satisfaction and solidarity with the company have gained in importance.

Concept of a sponsorship strategy

A sponsoring strategy represents the conscious and binding definition of the priorities in the sponsoring activities of a company for a longer period of time. It is often described in writing in the form of sponsoring guidelines, sponsoring principles or similar.

Strategy development in sponsoring takes place as a step process on two levels:

Rough selection of sponsorship areas: Decision regarding the sports, cultural areas, funding areas in social and environmental sponsoring or program or media sponsoring that are suitable for the company. Orientation towards the so-called affinity concept is suitable as a procedure. Here, the connection lines between the sponsoring areas and the products (product affinity), the target groups (target group affinity), the (desired) image (image affinity) or the corporate culture (responsibility affinity) of a company are examined.

When determining a sponsorship strategy, seven relevant dimensions can be distinguished:

Sponsoring subject: Determination of the reference subject appearing in public as a sponsor. The sponsoring subject becomes the communicative focus of a sponsoring commitment either in the form of an entire company, a product line or individual product brands or service programs.

Sponsorship message: Definition of the message to be communicated, e.g. in the form of a name, logo, slogan or emblem.

Sponsored: Determination of the funded individuals, groups of people, projects or events in terms of material, personnel and time.

Sponsorship measures: Determination of the individual measures in the form of advertising media and advertising materials of the sponsoring commitment (e.g. perimeter or jersey advertising, posters, advertisements in programs, video recordings, personal invitations to the VIP lounge, distribution of product samples).

Sponsorship timing: Decision on the time allocation of the sponsoring activity, i.e. determination of the time frame and the intensity of the use of the individual measures over time.

Alignment with the company's communication strategy

The sponsoring strategy is to be coordinated with the basic communicative task of the company. What needs to be analyzed is which communicative task has to be solved and what contribution sponsoring can make to solving the communication problem. The following types of communication strategies can be distinguished: Announcement, contact initiation, information, image profiling, competition delimitation, performance profiling, know-how, sympathy, regionalization, target group development and relationship maintenance strategies. In order to convey credibility, particular attention must be paid to a close relationship to the company's purpose, identity, philosophy, image and culture, especially in social and environmental sponsoring.

Integration of sponsoring into the communication mix

Companies communicate in various ways with current and potential customers, employees, the public and other target groups. In order to ensure an efficient and effective use of sponsoring in the context of marketing and corporate communication, an integration at the intra-instrumental and inter-instrumental level is necessary.

Intrain instrument integration: Coordination of the individual sponsorships with one another with the aim of realizing an optimal instrument-specific degree of target achievement.

Inter-instrument integration: Networking of sponsoring with the other instruments of corporate and marketing communication (e.g. media advertising, sales promotion, public relations) with the aim of synergetic reinforcement of the overall effect of communication.

With regard to the integration decision, three forms can be distinguished with the content-related, formal and temporal integration:

Content integration: The subject of the content integration is a thematic coordination between sponsoring and other communication instruments of the company. By creating uniform core messages, a consistent appearance is ensured and a synergetic increase in the communicative effects is achieved.

Formal integration: By applying uniform design principles such as brand name, logo, slogan, typography, layout, colors and key images, sponsoring is linked to other communication instruments in such a way that a uniform appearance is created.

Temporal integration: The temporal networking of sponsoring is about the analysis of the extent to which a parallel, successive, intermittent or alternating use of sponsoring with other communication instruments supports the effect of sponsoring. 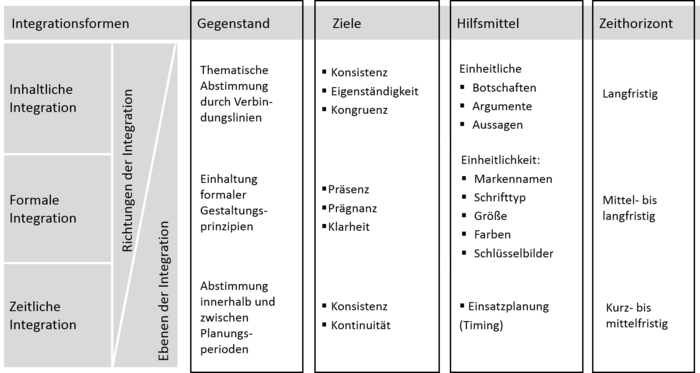 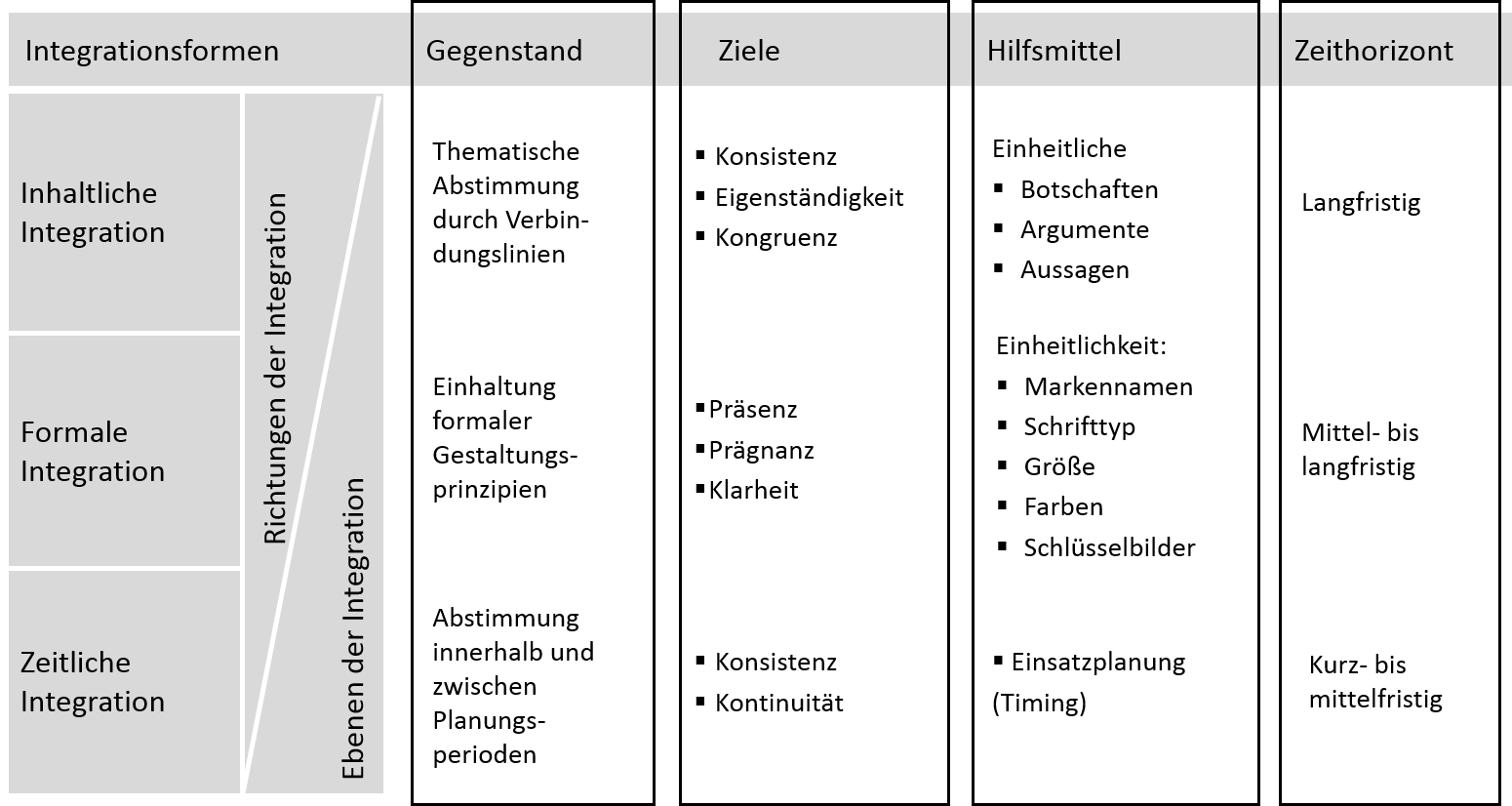 The subject of the success control is the analysis of communicative effects as well as an assessment of the cost-benefit ratio of the sponsorships. A distinction must be made between process, effectiveness and efficiency controls:

Process control: The focus is on controlling the processes involved in the implementation of sponsorships. Methods such as checklists, network plans and similar procedures are used to control the operational processes.

Effectiveness control: The object is the measurement of the measurable economic and psychological effects of sponsorship. The latter are usually in the foreground, since the economic target effects in sponsoring in most cases only occur in the medium to long term. Classic market research methods are used to demonstrate communicative effects.

Efficiency control: In order to assess sponsoring activities, cost-benefit comparisons are made as part of the efficiency control, i.e. the costs incurred for a sponsorship are compared with the benefits achieved. The benefits include all services that were achieved with the sponsorship, such as visitor numbers at events, television ratings and reach of print media.

By examining psychological target effects, the psychological processes occurring in target persons through communicative measures are analyzed. Depending on the results of the effectiveness check, more or less strong adjustments to the sponsorship concept must be made for sponsorships to be carried out in the future. The methods for measuring the sponsoring effects can be categorized according to the reactions to sponsoring impulses:

Measurement of affective success variables: The control of attitude and image effects, which can be checked e.g. by using the semantic differential, is of particular importance.

Conative success factors: It is still difficult to provide evidence of the behavior-related effects of sponsoring. Primarily consumer surveys are used on intentions to act (e.g. willingness to buy) and on remembered behavior. However, the results of such studies do not allow direct conclusions about the actual behavior. 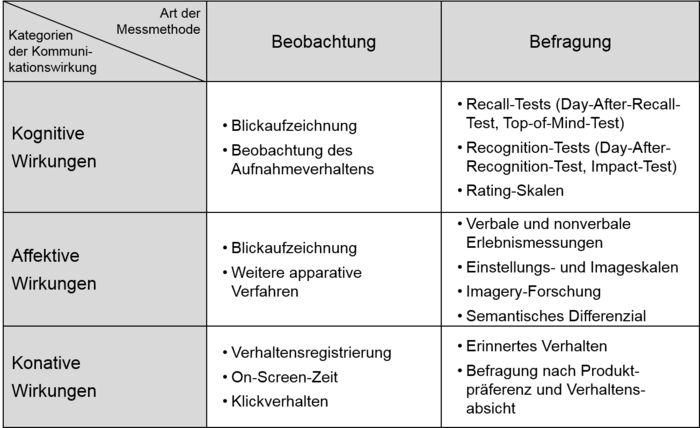 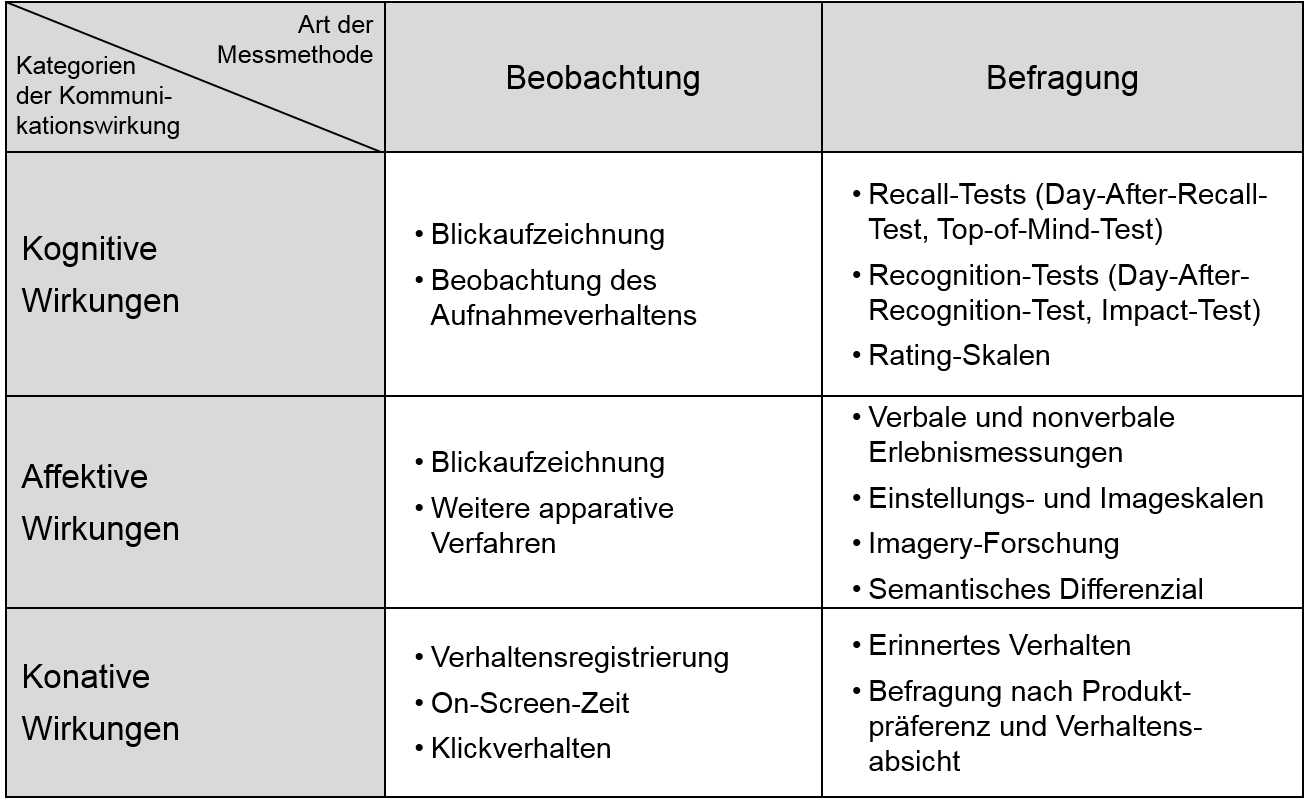 The monitoring of success in sponsoring is fraught with problems in terms of both content and method. In particular, the problems of interdependencies and the dependent attribution of effects are to be mentioned. In addition, the following open points of success monitoring are controversially discussed: Effect of sponsoring over time, cumulative effects when sponsoring, synergy effects of sponsoring, inclusion of media behavior, attention value of trademarks and purchase relevance of sponsoring.