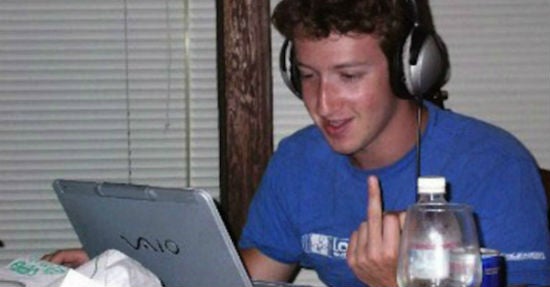 Is Facebook out again? Is the platform facing mass migration of users - and with it a loss of relevance for marketing? Such forecasts are discussed again and again in the industry. Online Marketing Rockstars Editor-in-Chief Roland Eisenbrand believes that Facebook will hardly be able to stand up to anyone in digital marketing in the medium to long term - and explains why.

In the past one to two years there have been repeated reports with the tenor: "Facebook is becoming uncool - teenagers are leaving the social network". Online Marketing Rockstars published a similar article in June 2014 (after all, we pointed out in it that the platforms Instagram and WhatsApp taken over from Facebook are extremely popular with teenagers). Most recently, a study was published in the name of the “youth magazine” Bravo, according to which Snapchat is now more popular with teenagers in Germany than Facebook.

What do the results of such research say about a possible business future for Facebook? Before answering this question, it is worth taking a long look at available statistics. Are there other platforms that have overtaken Facebook in terms of both quantity (number of users) and quality (frequency and duration of use)? The latest figures from the market research company comScore about users between the ages of 18 and 34 in the USA refute such a theory.

From social network to "identity platform"

From Facebook's point of view, the decisive factor is whether the users really actively leave the company's main platform or whether they “only” use it less often and for a shorter period of time. As long as the users do not delete their Facebook account, but instead remain registered and logged in to the platform, the company can continue to use it to collect data about the respective user and to identify them across all devices.

One aspect that speaks for Facebook at this point is likely to be: The “Facebook sign-in”, i.e. the ability to register and log in with your Facebook account on other websites or apps, is now available on many other platforms such as for example the streaming service Spotify or the shopping club Westwing. For users, the Facebook sign-in simplifies registration and, above all, increases convenience on mobile devices: Instead of having to laboriously type in an email address on a small touchscreen and then possibly (in order to be able to complete the registration) in one If they have to click on a link received by email in another app or another browser tab, users only tap the corresponding button once when using the Facebook log-in - the data is then exchanged automatically via interfaces.

Facebook is the most important "social sign-in" on the web

Because the Facebook login removes the hurdles for potential customers to register, it is also extremely attractive from the point of view of the app and website operators - also because Facebook, with 1.6 billion active users worldwide (own information), is still an extremely high one Range has. The operators of the gadget and tool community Product Hunt, for example, tripled the number of their registrations by integrating the Facebook login. According to a survey by the technology service provider Gigya, 62 percent of all “social logins” on websites and in apps were made via Facebook in 2015 - Google followed in second place with 24 percent.

There are some indications that Facebook will remain important as the central “identity platform” in the digital sphere, at least in the medium term, even if the intensity of use of the company's main platform decreases and therefore it may take a back seat from the user's point of view. Facebook already has very precise data about users, their interests and preferences - and for this reason will presumably also have them in the future.

Because of this data quality, Facebook can offer targeting options in the online advertising market that are extremely attractive from the advertiser's point of view. A few fictitious examples: An organizer of a heavy metal festival who now wants to offer his target group a ski trip with a corresponding musical supporting program can address metal fans who are also interested in skiing on Facebook. An operator of a craft beer shop can use Facebook to display craft beer fans in the immediate vicinity of his shop.

With the "Custom Audiences" function, companies can upload their customer data to Facebook, Facebook will then find customers within the network (using their email address or telephone number) and companies can display additional offers to this advertising. With the “Lookalike Audience” function, advertisers can then have Facebook create an ad target group with users who have similar profiles to existing customers, display this advertising and thus potentially win very attractive new customers.

However, it would be a mistake to underestimate the potential of Facebook Advertising. Compared to its competitors, the company has an enormous advantage in the mobile area, as it can identify users across platforms and devices better than it would be possible with cookies alone. And because spending on mobile advertising has not yet risen to the same extent as the usage time of mobile devices on the consumer side, Mary Meeker of Kleiner Perkins Caufield & Byers sees untapped sales potential of around 25 billion US dollars for mobile advertising in the USA alone Dollars (see slide 16). In addition, with Atlas last year, Facebook started to display advertising outside of its own platforms based on its own data. "Atlas has the potential to become the market leader among ad servers," said Nico Shenawai, then managing director of Performance Media, one of the first German Atlas customers, to Online Marketing Rockstars (we have reported extensively on Atlas: Part 1, Part 2).

Probably at least as important: Facebook recently started rolling out the advertising product described above, known from the main platform, on other platforms as well. With Instagram and WhatsApp, Facebook now has two of the world's most important and far-reaching mobile platforms. At the same time, the company has enormously expanded the reach of its self-developed Facebook Messenger. With Oculus Rift, Mark Zuckerberg has also bought up the most well-known player in the virtual reality segment and thus staked a sizable claim in a potentially important future segment.

For several months now, it has been possible to book advertisements on the basis of Facebook data on Instagram via the well-known Facebook advertiser interface; Corresponding tests are planned in Facebook Messenger. With WhatsApp and Oculus Rift, Facebook would only have to find a way to integrate advertising that does not annoy and sell users - the data on the basis of which such advertising can be targeted and thus efficiently controlled is already available. 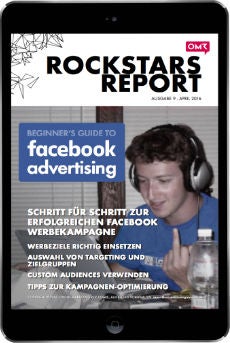 It is therefore only advisable for every online marketing maker to familiarize themselves with the Facebook advertising platform and its mechanisms. It will play an even bigger role in the future than it already does now.

Do you want to learn how to advertise on Facebook, create target groups and how you can optimize your ads? Our new report "Beginner's Guide to Facebook Advertising" gives you everything you need to know to get started right away!