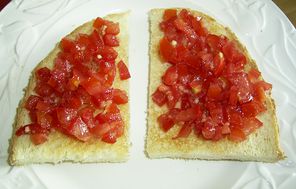 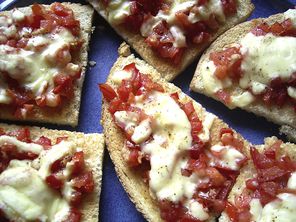 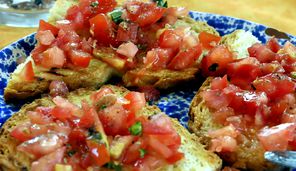 The Bruschetta is a simple starter or snack that has produced many different regional variations. However, it is only vegetarian if animal products (ham, fish, etc.) are omitted from the alternative preparations.

Bruschetta will brusketta pronounced. The name is from Italian abbrustolimento derived what "roasted" means. The toasted (piece of bread) is made bruscato called, Bruschetta is a diminutive of it. The bruschetta is a typical starter of Tuscany and Campania. In Tuscany, however, they are called fettunta, elsewhere panunto. In Piedmont there is a type of bruschetta called soma d'aj. Calabria knows the bruschetta by the name fedda ruscia (fetta abbrustolita = "browned slice of bread").