How powerful is Egypt

Bathing in donkey milk, spacious palaces, eager slaves and servants - according to popular belief, the pharaohs of Egypt and their families hardly lacked any amenity. And physical well-being was always taken care of. But was that also why they were healthier than their contemporaries? And how long did kings and elites live around 3,700 years ago?

Spanish and Egyptian researchers investigated this question in the summer of 2013. To this end, they examined more than 200 mummies from the necropolis of Qubbet el-Hawa near the present-day city of Aswan. The dead included members of three different ruling dynasties who were buried in the necropolis on the mountainside.

The surprising thing about it: The mummies included a striking number of young adults between the ages of 17 and 25. Numerous children were also found among the dead. But why? What had killed these princes and princesses at such a young age? It couldn't have been accidents, manslaughter or war, say the archaeologists. Because there were no traces of injuries, fractures or other bone trauma on the children's mummies.

The researchers are therefore more likely to bet on diseases. Their hypothesis: an unbalanced diet and inadequate hygiene brought the Egyptian offspring early death. Despite their wealth and privileged position, they could have made the children susceptible to infections and parasites. 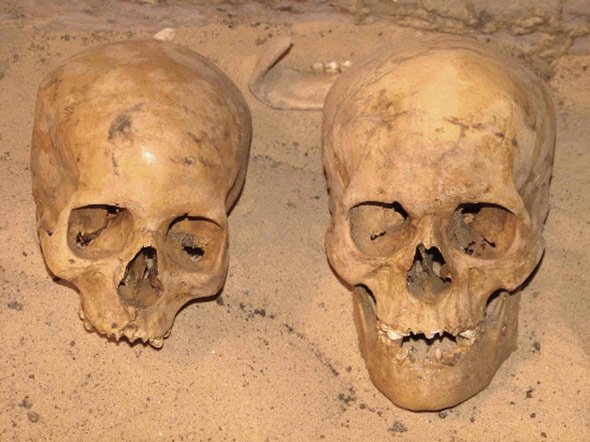 Two skulls of ancient Egyptians excavated during the excavations in Qubbet el-Hawa. © University of GRanada

Indeed, the researchers found evidence of malnutrition in the mummies, in some cases even of malnutrition. That does not necessarily mean that there was too little to eat during the lifetime of the princes and princesses, as the researchers emphasize. The symptoms could instead be caused by an overly unbalanced diet or by parasites and chronic infections of the gastrointestinal tract that the Egyptians contracted when they drank the polluted water of the Nile.

“The age was highly developed on a cultural level. Yet the analyzes show that the population in general, and even the highest social classes, lived in conditions that were highly precarious to their health. They were struggling to survive, ”says study director Miguel Botella Lopez from the University of Granada.