Why shouldn't Costco have samples available?

This long-running share has increased by almost 20% per year over the past ten years and has a decisive competitive advantage!

The market has been very strong in the last few weeks. The cyclicals in particular were able to recover very quickly after the vaccine news. However, many stocks have now run hot and a correction could be healthy. The sentiment indicators and the Fear & Greed Index are at their limit. At the same time, the VIX and the put / call volume are lower than they have been in a long time. The short interest in the S & P500 is 1.6% - an all-time low. Hardly any investor has prepared the portfolio for a correction.

These factors speak in favor of a more defensive positioning. Former high flyers and corona profiteers were hit hardest when the vaccine news was published. Daniel Yacktman, a successful value investor, prefers non-cyclical companies that sell products with a long product life cycle. In addition, the products should have a short customer return cycle. An example of such a product would be toothpaste: people need toothpaste and buy the product at relatively short intervals. In addition, the product life cycle is very long - after all, toothpaste does not have to be continuously developed. A counterexample would be cars: people buy cars every few years and companies have to invest a lot because the product life cycle of a car is quite short. In a recession, toothpaste companies' profits don't go away as people continue to need the product. Car manufacturers, on the other hand, are struggling with severe slumps as people decide to buy the new car in a year or two because it's not so urgent today.

For reasons of diversification, it now makes sense for investors to focus on quality companies with the characteristics described. However, such companies cannot be found in the currently booming industries such as cyber security, solar or artificial intelligence. Solid companies with crisis-proven business models tend to be found in the wholesale and retail sectors. By the way: "Consumer Staples" (= basic consumer goods) is the sector on the US stock market that performed best from 1976 to 2015 in terms of returns and volatility. To that end, this article will be about a company from this sector: Costco Wholesale. 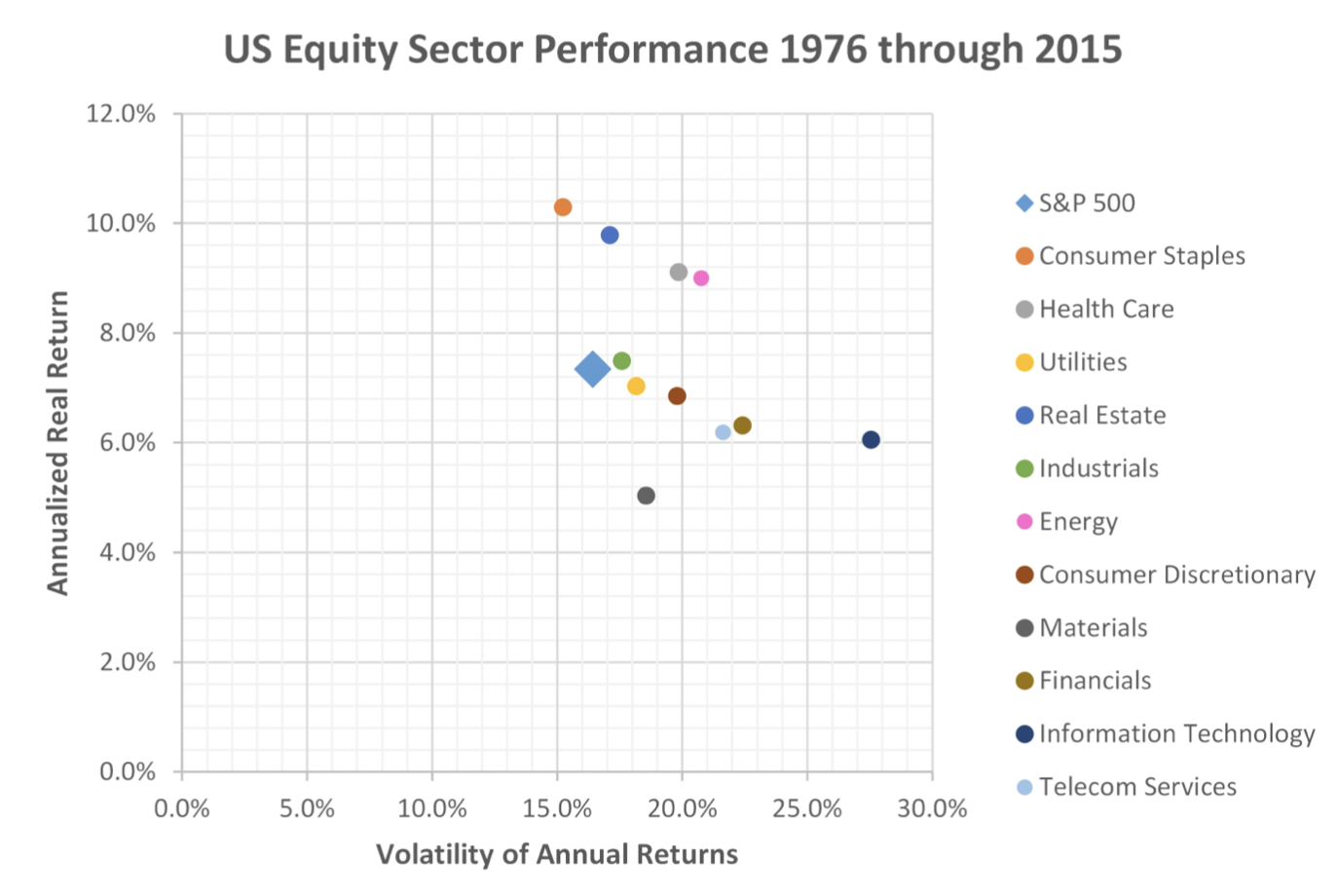 Costco Wholesale (Costco) supplies small shops or businesses and operates a wholesale chain. The company is particularly well known in the United States and Canada for its large-volume purchase of products. At Costco, for example, you don't get 6-10 eggs, but 50 eggs. The catering industry, but also private households, buy their products from Costco. The company scores with low prices and good quality. The concept - low prices and high quality - only works if sales volumes are high and inventory turnover is fast. In other words: Costco relies on offering the products cheaper than the competition (e.g. Walmart) by saving costs and working extremely efficiently. In order to work efficiently, the company has taken several measures: bulk shopping, self-service department stores (save labor costs), efficient distribution, etc.

The lower costs for the end consumer have already paid off, as Costco is gradually gaining market share. Costco is also likely to see itself exposed to higher customer loyalty, since a membership with Costco is the purchase requirement. Families or restaurants without membership cannot shop at Costco. Customers have to pay an annual fee for membership. This is a win-win situation for Costco and its customers: buyers get quality products at low prices. In the end, it will probably be cheaper for the consumer despite the annual fee. Costco wins too, as customers who are already paying for membership are likely to go to Costco more often, staying away from the competition.

In times of the corona virus, in addition to a strong core business in wholesale, an e-commerce sales channel is also crucial. But Costco beats the competition in this area too: In the third quarter, the e-commerce sales channel grew by 90%. Walmart's e-commerce business grew "only" 79% in the third quarter. Although Costco has a lower operating margin than Target and Walmart due to low prices, operating income has tripled since 2010. Walmart and Target's operating income has remained almost unchanged since then. Costco is increasingly gaining market share due to the price and cost advantage and this is reflected in EBIT and the share price.

Tip:TraderFox Visualization enables you to make such chart comparisons!

In order to properly assess Costco, one has to evaluate its financial metrics against the competition: Walmart and Target. If you look at the margins, you see that Target is the winner. The company has the highest EBIT margin (5.82%) and the highest free cash flow return (4.54%). In addition, the return on equity is the highest at 28.37%. Costco works with lower margins, but these are on average and no worse than Walmart's margins. In addition: Costco is growing the fastest by far and this factor is likely to have the greatest impact in the long term. Without top-line growth, i.e. sales growth, a company cannot increase its operating income significantly - no matter how many efficiency gains are made. Ultimately, the decisive factor is how quickly the company grows profitably. Costco has grown more than twice as fast as Target and almost four times as fast as Walmart over the past three years. At the same time, margins could be kept stable and the dividend increased twice as fast as Target and six times as fast as Walmart. Costco has a clear competitive advantage! Here is the peer group comparison:

Costco trades at a premium compared to Walmart and Target. In terms of P / E and expected P / E ratios, Costco is 50-80% more expensive than Walmart and Target. Measured in terms of EV / EBIT, a ratio that takes into account the financing structure, Costco is only 50% more expensive than the competition. If you look at the KCV and thus set the market capitalization in relation to the cash flow actually generated, you will notice that Costco is even cheaper than Walmart. With a P / E ratio of over 40, Costco is by no means cheap. The company is valued like a growth company. The following table provides an overview of the evaluation metrics:

Tip:With the Peer Group Comparison from TraderFox, such tables can be created with ease!

Conclusion - is the premium justified by the competitive advantage?

Costco has a sustainable competitive advantage through a more efficient operational business and therefore greater pricing power. This is priced in on the stock market with a premium. In the next few years, Costco is likely to continue to grow and, above all, to expand the e-commerce sales channel. The company is a solid dividend payer (dividend yield of 0.8%) and can be classified as a long-runner share: Over the past ten years, the share has risen by an average of 18.97%. The analysts forecast further growth and a profit increase of almost 50% by 2023. Price setbacks could be used by investors to build up a position in a non-cyclical company with a moat and long-term runner characteristics. 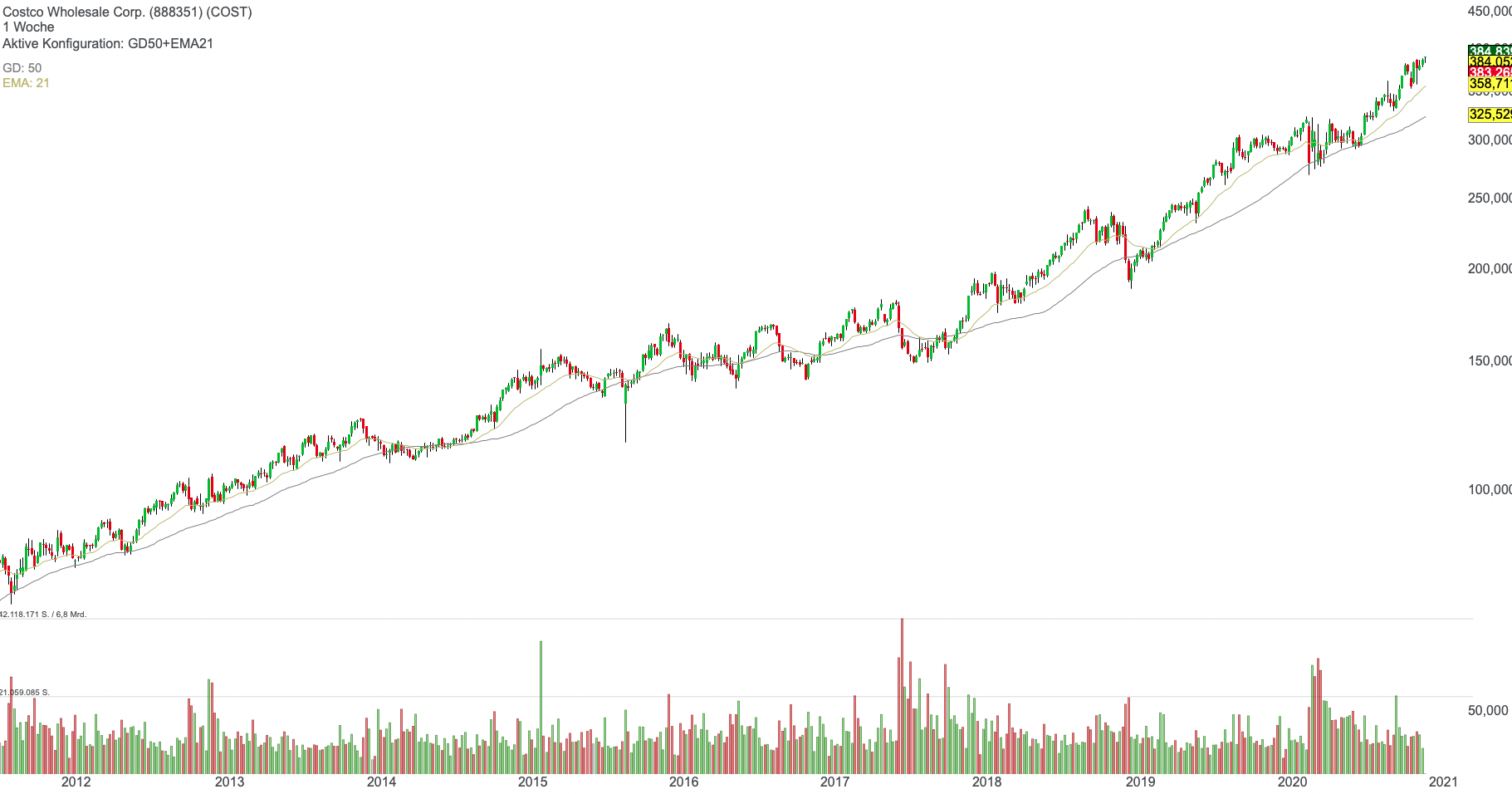