What are the Irish famous for 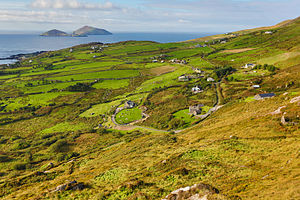 The Ring of Kerry is the name of a well-known street in the southwest. There you have a good view of the coast.

Ireland is a country in northwestern Europe and a member of the European Union. The Republic of Ireland is located on the island that bears the same name. However, the north-eastern tip, "Northern Ireland", belongs to Great Britain. The Northern Ireland border is the only border with any other country.

Ireland is almost twice the size of Switzerland, but has only a little more than half as many inhabitants. Especially in the 19th century the population decreased because many Irish emigrated. It is estimated that there are around 60 to 70 million people with Irish ancestry around the world today.

Dublin to the east, on the coast across from Great Britain, is the largest city and capital. Most Irish are Catholics, but in Northern Ireland many people are Protestant.

The whole island had belonged to Great Britain from around 1700. It was only after the First World War that the Irish were able to determine themselves again, i.e. only after more than 200 years. Much has changed during this time. Most Irish today no longer speak Irish, which is a Celtic language, but English.

What happened earlier in Ireland?

The Celtic people of the Irish inhabited the island in ancient times. When the Romans conquered Britain, neighboring Ireland was spared. Perhaps that is precisely why Celtic culture persisted much longer in Ireland than in England.

Ireland became Catholic in the Middle Ages. At that time it was not a united country, but consisted of many kingdoms. The Irish were often attacked by Vikings from Scandinavia, who founded their own settlements on the island. One of the settlements was Dublin. In modern times, the Irish kingdoms were gradually conquered by England.

In the years after 1840 there was a severe famine in Ireland. Even so, the British brought grain from Ireland to England. More than a million Irish died then, and even more emigrated. That is why there are many people in America today and elsewhere whose ancestors came from Ireland.

Around 1920 there were more and more Irish people who no longer wanted to belong to Great Britain. They formed a resistance group, the Irish Republican Army, which waged a war of independence against Great Britain for two years. Ireland then became a republic, but the north remained with Great Britain. In the second half of the 20th century, therefore, there was a lot of controversy between the north and south of Ireland.

What is Ireland known for?

Ireland is called the green island because of the many meadows and pastures. Eight million sheep graze there, twice as many as there are Irish. There are more mountains in the west and south. The four-leaf clover, a symbol for the Irish, is also green.

Ireland is home to many famous poets and musicians. The Limerick, a funny poem, comes from the south of Ireland. Irish music is known for wild violin music. The old songs are sung in English or Irish.

The most famous folk festival in Ireland is St. Patrick's Day on March 17th. They celebrate St. Patrick, who once preached Christianity to the Irish. On this day everyone wears green clothes, there is a lot of alcohol drunk and Irish songs are sung. Irish immigrants brought the fair to the United States. From there it became known all over the world.

Irish cuisine has many hearty meals. Many dishes contain lamb or pork. Irish stew, for example, is a stew made from lamb, potatoes, onions and parsley. People like to drink a strong, dark beer with their meals. Whiskey is also a popular alcohol in Ireland.