The final list: this is how the ultimate film and series enjoyment succeeds 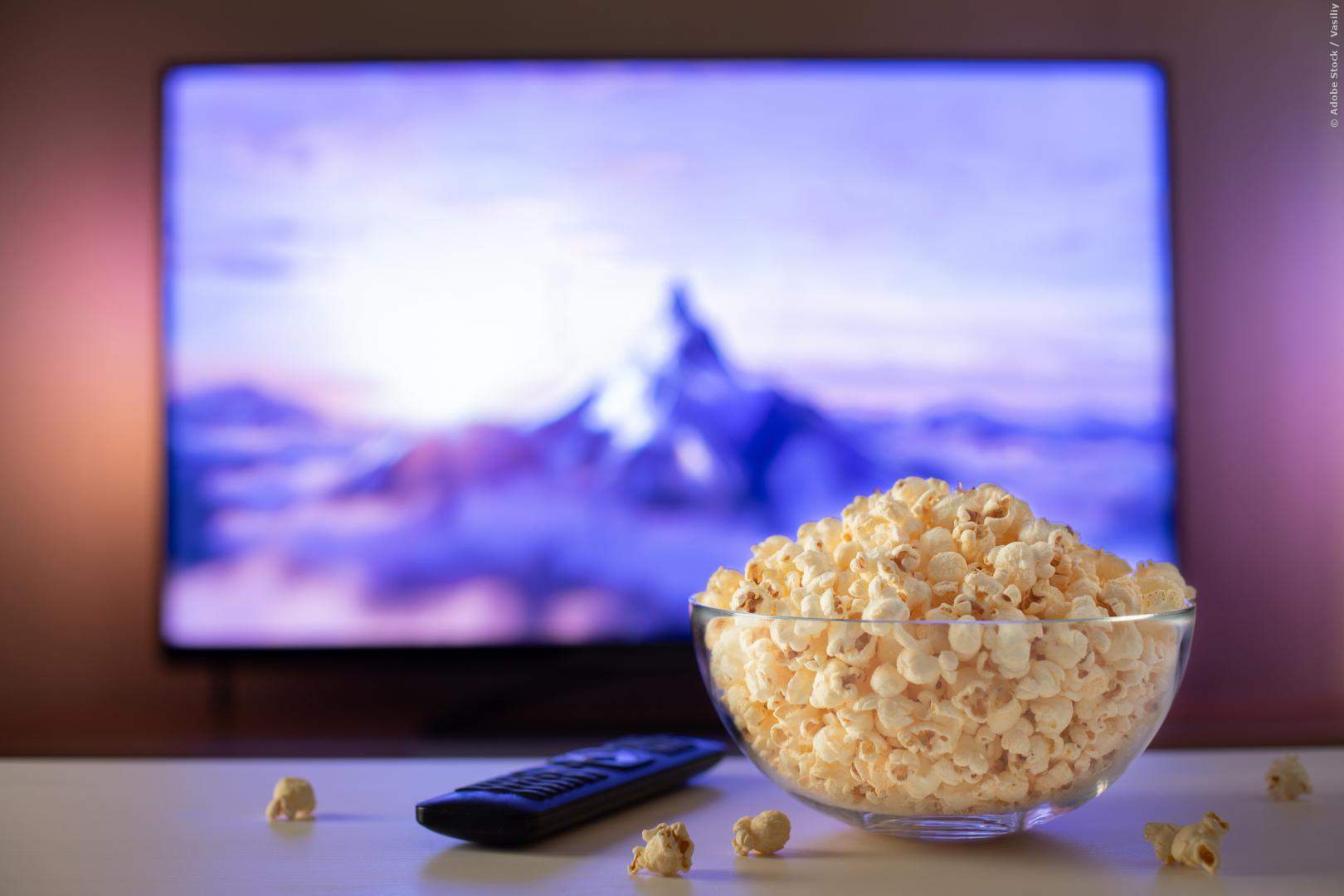 Sitting comfortably on the sofa and enjoying the best entertainment to your liking for hours - this is how most people imagine the ultimate movie night. But the right technical equipment, a good selection of films with which all participants are satisfied, the right atmosphere through well-organized trappings and, of course, it should be as comfortable as possible.

Unfortunately, all of this is necessary nowadays in order to make a movie night something special in times of endless media coverage. So that nothing interferes with this fun, there are a few points that should be considered. The following article shows how this can be implemented - watch the movie!

“Nobody has to go to the cinema anymore, nowadays everyone has a large-format flat screen TV at home.” - You hear it again and again when it comes to the question of why, apart from the big blockbusters, the cinema halls are increasingly empty.

Basically, of course, there is something to this statement - compared to the small, fuzzy devices that enlivened our living rooms just a few years ago, large HD televisions are getting closer and closer to the visual experience of going to the cinema. Conversely, this of course makes them much less special.

On the other hand, a consciously planned film evening should be as special as possible - and a media experience that is as impressive as possible forms the most important basis for this. Good equipment and the right organization of the room are therefore very important.

The size is what matters

This is undoubtedly the most important factor for perfect film enjoyment: the size of the picture. All good cinema films are made for this: For a big cinema screen - and that's where they look best. Since the production quality of TV series or Netflix productions is no longer worse than that of the big Hollywood studios, the same applies to these of course.

Of course, modern televisions have become very large - screen diagonals of 50 inches (127 centimeters) or more are no longer uncommon. But it still has little to do with real cinema format: In small film houses, these start at around eight meters wide and sometimes even reach the 27-meter mark - in the case of IMAX formats, for example.

Of course, hardly any home theater system comes close to this size, not even a setup with an expensive projector and a screen. Fortunately, it doesn't have to. Because the actual image diagonal is not the only decisive factor when it comes to filling the field of view with high-resolution images as possible. 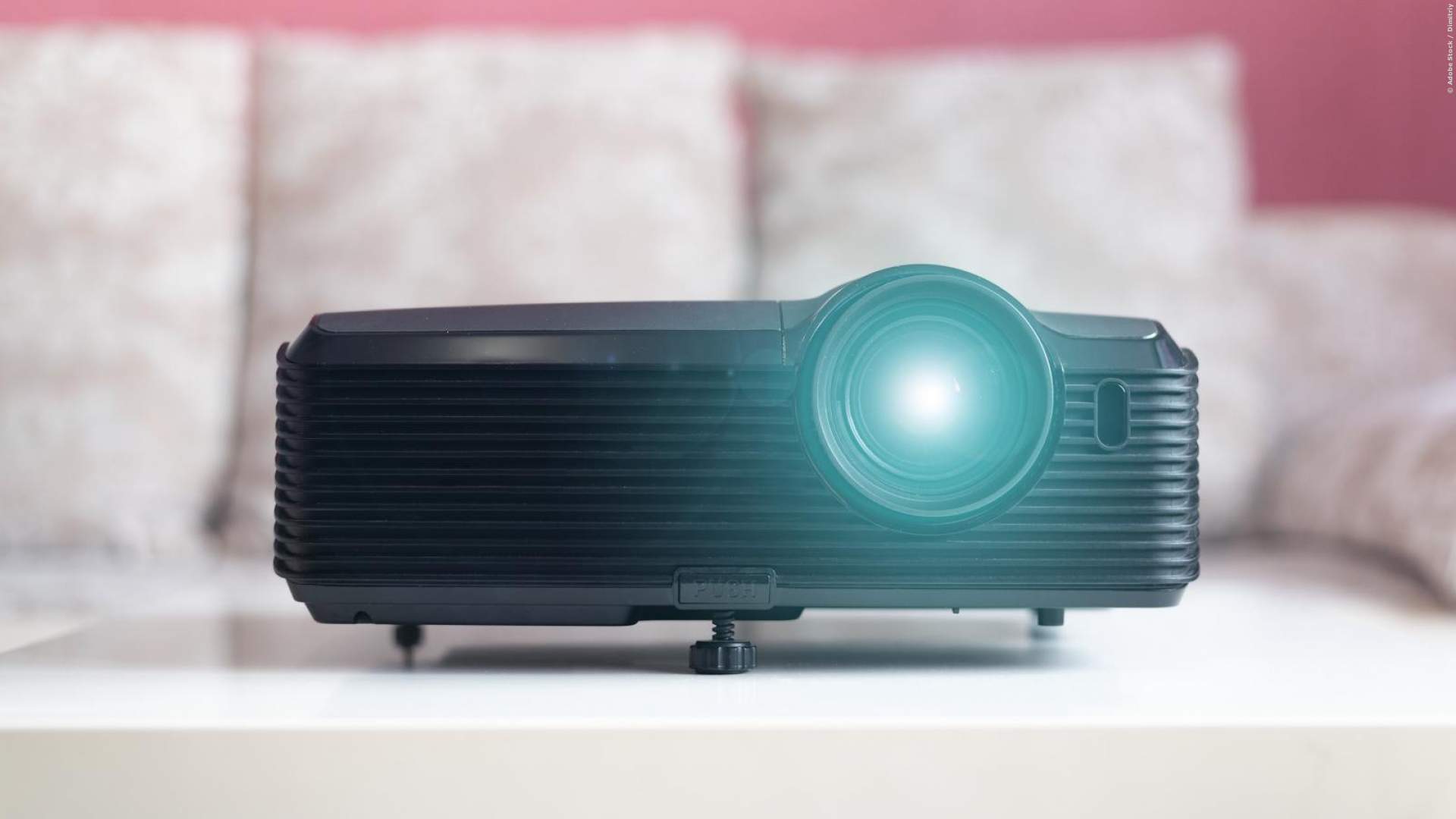 Ultimately, the distance between the seats and the picture is decisive. In cinemas with a screen width of over ten meters, this is in most cases between four and five meters - up to the first row. The most popular seats in the middle of the room are usually about six meters further back.

In order to create the most authentic cinema feeling possible in your own four walls, you do not need a huge screen, as the distance between the seats is correspondingly smaller. As long as this ratio is chosen correctly, the picture fills a large part of the viewing angle.

In professional cinemas, the rule of thumb is that no seat should have a viewing angle of less than 30 degrees from the screen. With a television that is one meter wide, this results in a seat pitch of a maximum of 186 centimeters for a central seat. With a large-format, expensive device, as is often found in living rooms and home cinema rooms by film fans (65 inch screen diagonal), we end up with a maximum distance of 270 centimeters.

The exact calculation with the help of angles is a bit overcomplicated - a good approximation is to calculate the width (not the screen diagonal) of the screen times 1.8 in order to get an approximate estimate of the greatest distance between the seats.

That seems to be very close to the scene of the crime for the everyday television evening and it is - but in order to simulate a visit to the cinema that fills the field of vision, you have to get a little closer. This also has another advantage: It makes it easier to set the sound system optimally.

Powerful on the ears

When you go to the cinema, the sound is at least as important as the picture. Filmmakers put a huge amount of effort into audio production - without the right sound system, a great film is only half as fun.

A surround system is ideal, but correctly aligned, high-quality stereo speakers raise an action-packed film or strip to a new level with a special soundtrack. The problem: only if the loudspeakers for the seats are correctly aligned will the film sound the way the sound engineers intended. To do this, you could take out the measuring tape again - because the optimal seat distance is also determined by the so-called stereo triangle.

The two front speakers, which are on either side of the television or the screen, should be just as far apart as they are from the optimal seating position - this results in an equilateral triangle between these points.

Since there will be several people sitting in front of the TV, not all of them will be able to sit perfectly - but the closer they are to this spot, the better. If possible, it may be worthwhile to adjust the speaker positions accordingly. 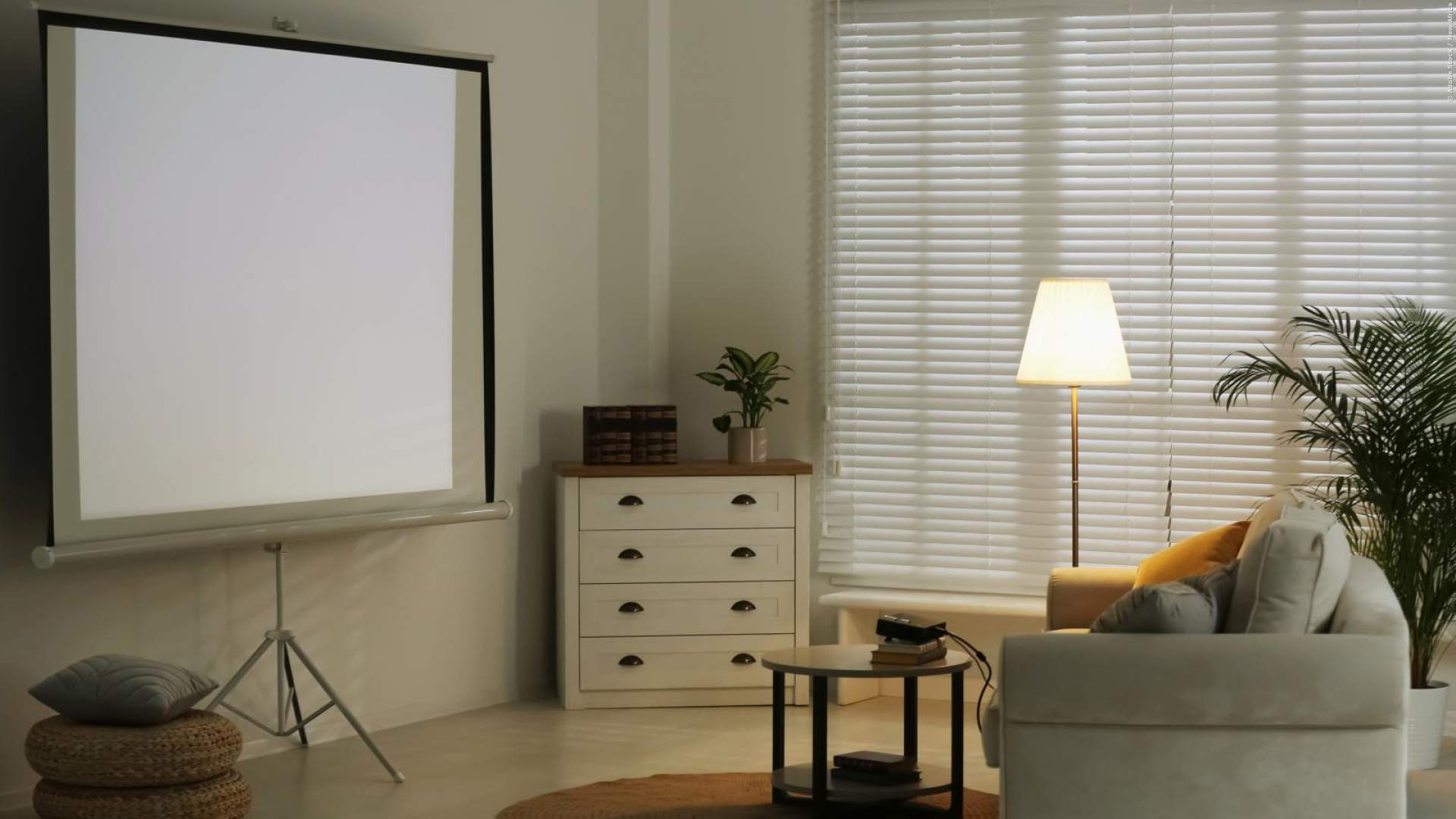 If you have the choice, or even want to put together your own home theater system, you may be faced with the question of whether a projector or a television is more suitable - and whether HD or even 4K is really an important requirement.

Unfortunately there is no short answer to this - the discussion of the advantages and disadvantages alone could fill an article of this size again. However, to speed up a decision-making process, here are some tradeoffs on this matter:

This brings us to the next topic: the internet connection. Thanks to the high quality and the enormous range between Netflix, Amazon Video and all the other streaming providers, it is no longer unlikely that the film for the evening at the cinema will also be streamed over the Internet. Then it is particularly important that the connection also provides sufficient performance so that the enjoyment of the film is not spoiled by loading breaks or pixel mud. A higher, stable bandwidth is definitely necessary for the smooth streaming of 4K films.

On the one hand, it is important to have the right connection that delivers high speed. That doesn't necessarily mean an expensive tariff: a modern connection that creates 50 Mbit per second, for example, is also easily sufficient for 4K films.

The problem: Depending on where you live or even the street, very different bandwidths can be available from different providers or even depending on the connection technology. Informing and comparing is therefore worthwhile - a switch to a locally better developed technology can make the connection many times faster and enable the streaming of strips in 4K resolution.

On the other hand, the cabling in the apartment is also a decisive factor - if the television is too far away from the WiFi router, this can lead to weaknesses in the connection. Then even the fastest connection doesn't help - pulling a classic cable can help in these cases. 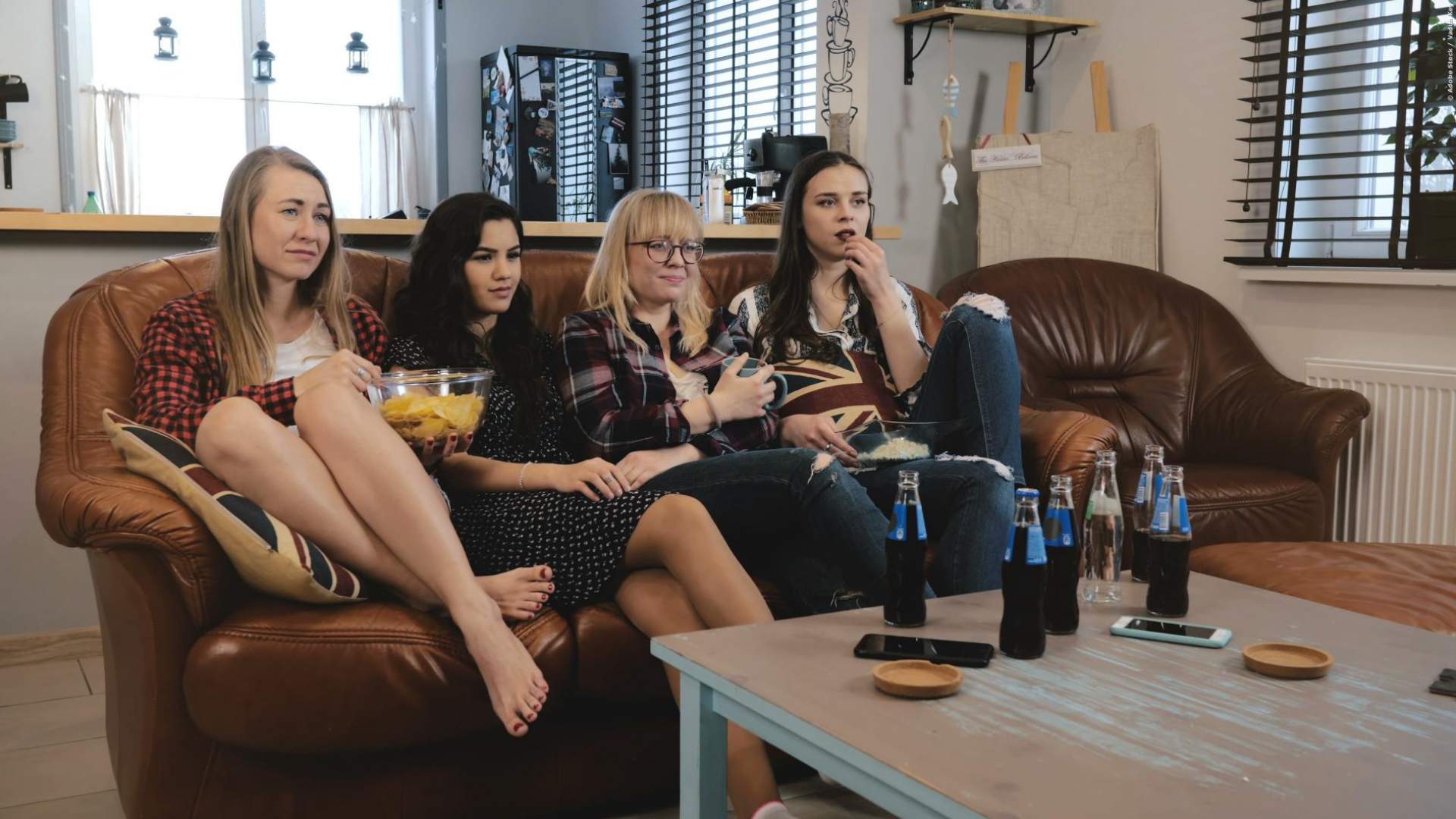 An important factor when going to the cinema is to concentrate fully on the film. Lights off, film on, total immersion until the credits roll across the screen. In order for the strip to come across correctly at home film evenings, possible disruptions should be excluded as much as possible.

If the technical implementation is correct, there is another central factor that is decisive: choosing the right strip. The undisputed focus of a movie night is perhaps the most important and therefore often the most difficult decision. What is ultimately correct depends, of course, on the guests and their preferences. It is very important that nobody gets bored or finds the film unbearable. This can quickly disrupt the harmonious evening and also spoil it for everyone else.

Since there is no arguing about taste, we do not give specific recommendations - between art films with a foreign Oscar award or a real trash marathon, everything is a good decision, as long as there is agreement. Nevertheless, there are a few important tips that can ensure that the cinema night does not turn into a flop thanks to the wrong selection of the film: 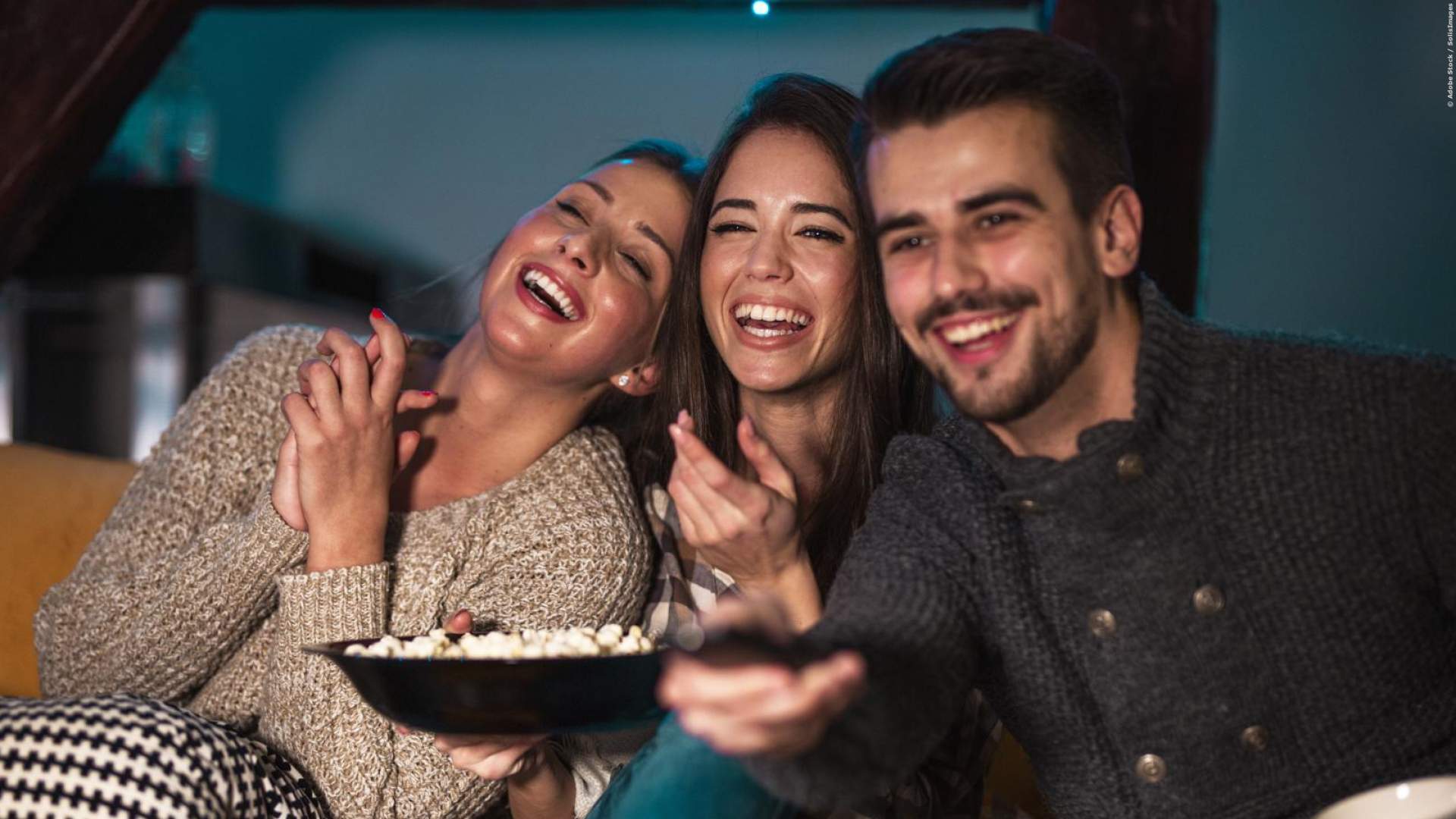 Good picture and sound quality with the right spatial distance, a work that meets the taste of all film evening participants - that already creates a good basis for a successful event.

But all the trimmings are still an important factor. Without a coherent atmosphere, cozy seats, organization tailored to the film evening and the right snacks, small disruptive factors can come together that can spoil the experience. The most important mistakes can be easily avoided with a few tips:

Therefore rule number 1 is: no bags! The loud rustling quickly gets on everyone's nerves and prevents the uninhibited snacking that actually belongs to the movie night. Serving everything in bowls right from the start solves this problem. 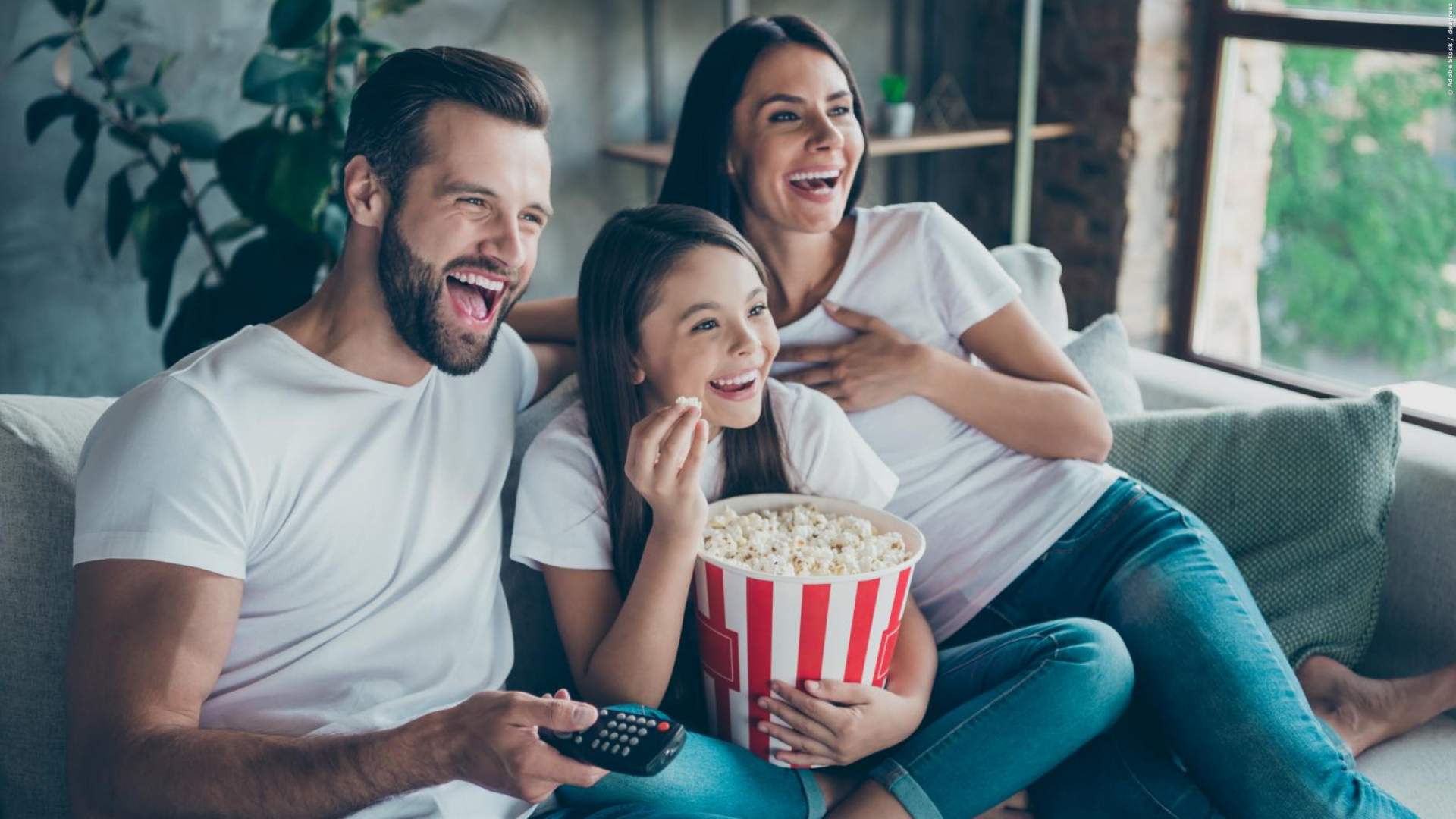 An evening together with a great film or your favorite series is a big investment of time - so it is important to make sure that nobody gets bored or that little mistakes spoil the mood.

On the technical side, the following applies: A television that is as large as possible with about 1.8 times the width of the seat, a clear sounding stereo or surround system that is also optimally aligned to the seats and a good HD or 4K film that if streamed, runs smoothly and without any loss of quality - and uncompromising film enjoyment is guaranteed.

Then invite the right friends with the same interest in the film, prepare comfortable seating and delicious, noise-free snacks, make sure that no bright light source, no cool breeze or no ringing cell phone disturbs. The perfect home cinema evening is ready and will be remembered for a long time.