From Salzburgers, Indians and black slaves 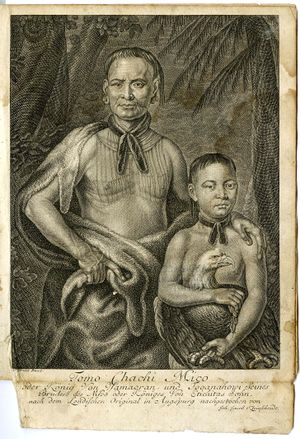 About Salzburgers, Indians and black slaveswho had to leave Salzburg in the course of the Protestants expulsion of Prince Archbishop Leopold Anton Freiherr von Firmian in 1731/1732 and in some cases also in the years up to 1736, reports this article.

The expellees came via Bavaria to Protestant territory in the German Reich, where they were welcomed with a lot of support. Some stayed in Germany, some emigrated to East Prussia, some settled in the Netherlands and others emigrated to America with the help of the British Crown.

What Salzburg Protestants thought of Indian kings on their way to the New World, how they were welcomed by the indigenous Indians in Georgia and what emigrated Salzburgers thought of slaves from Africa is highlighted in a new borderline case from overseas, which took place on August 5, 2015 at the Platform for the European region[1] has been published.

Salzburgers who sail across the Atlantic with Indian chiefs are a rather rare occurrence in the country's history. Nevertheless, such a crossing is historically guaranteed, there is even a newspaper report in the "Wienerisches Diarium".

Salzburg residents sail across the Atlantic with Indian chiefs

How did that happen? A small group of emigrants expelled from Salzburg in 1732 because of their Protestant beliefs reached the former British colony of Georgia via Rotterdam on the then adventurous and, for many, fatal sea route. A few miles upriver from the newly built capital Savannah, 150 former Salzburg residents founded a town which they gave the biblical name Eben-Ezer - "Stone of Hope" - gave. Another colonist ship arrived in 1734. In addition to emigrants from Salzburg, a delegation of "Indian-Royal Persons" was on board on the return journey from an invitation from the British King. "During the whole trip the Indians showed their already well-known fashion streak in everything", their modesty is emphasized with appreciation.

The Creek Indians who lived there received a warm welcome. "The Indians reached out to me to show their joy at the arrival", reports the young baron Philipp Georg Friedrich von Reck, the travel commissioner for the emigrants. As miners, many of the Salzburgers were used to the alpine climate, in the swampy and sandy floodplains of Georgia the contrast could not be greater. Diarrhea, malaria and scurvy caused the Salzburgers Up to half of the emigrants did not survive the first three years. The first sufficient harvest could not be brought in until 1739. The Indians willingly made themselves available as hunting guides and gave the white settlers venison and peach trees against the vitamin deficiency Indians were raisins.

The indigenous people were described as peace-loving, when they were insulted they quietly demanded satisfaction and remembered this for a lifetime if it was denied to them. The Indian language and Salzburg dialect were exchanged, soon also rum, which had a devastating effect on the Indians. The spiritual leader of the expellees, Johann Martin Boltzius, a native of North German, described in his diary entries a case of adultery between a white settler and an Indian woman. She lost her hair and ears for it, the European was brought to justice and severely punished, which was welcomed by the Indians. It was Boltzius who vehemently advocated relocating the settlement to an agriculturally and climatically more favorable location, which succeeded after disputes at a higher level. The many people from Salzburg gave the settlement community its name, but colonists also came from Germany, Switzerland and Scotland. Twelve Jewish families are mentioned who devotedly attended the Protestant service and were able to communicate in German.

U-turn in the slave question

The newcomers had to take a stand against another group of people: black work slaves from Africa. With the upward trend of the young colony, a labor shortage quickly set in, and large landowners demanded slaves for their plantations and fields. In neighboring South Carolina they already made up 65 percent of the total population. The Salzburgers wanted to show that they can do it on their own. Thomas Geschwandel, a former miner from the Gastein Valley, signed a petition against slavery in 1739, less for moral than for economic reasons, as it was feared that the large plantations would fall behind economically. According to its own admission, Geschwandel did not want to live among slaves. There were also disturbing reports of slave riots in the Caribbean. When a supervisor came to Eben-Ezer with ten work slaves, the people of Salzburg wanted nothing to do with what they consider "Moorish heathens". Boltzius initially spoke out against slavery for religious reasons. Economic growth and external pressure caused a turnaround soon, also against the Indians. The indigenous people of the Yamacraw tribe under their chief Tomochichi were displaced from their previous settlement area: "God grant grace that we of the Indians may zealously pray to him because of what the best weapons are to ward off these wicked guests", was written to Europe in 1741. And in 1748 the council and mayor of Eben-Ezer decided"To allow Negro or Moorish slaves under certain conditions". Boltzius saw in the Africans a new mission goal and towards the end of his life kept himself slaves. The integration into the New World was accomplished morally and economically.

This book tells of the cruel expulsion from Salzburg, the difficulties of the trip to Rotterdam and, using Johann Martin Boltzius' diary, of the difficult life in Eben-Ezer

Contributions on the subject of eviction
<?