Plants spread their genes through pollen. Targeted suppression of pollen formation could be of particular interest in plants that are to be used for the production of industrial or pharmaceutical substances and the spread of the genes via the pollen is undesirable. There are now various genetic engineering approaches to produce "male sterile" plants - that is, plants without pollen.

No pollen, no spread. Pollen is produced in the male parts of the flower, the stamens (anthers). If the formation of pollen is prevented, the plants are male sterile - they can no longer reproduce.

For decades, sterile male plant lines have been used in plant breeding. They cannot produce pollen capable of being pollinated and are used in hybrid breeding as mother plants for seed production. The aim is the controlled pollination by selected father lines on the male sterile mother lines. Cytoplasmic male sterility (CMS) is used primarily in maize breeding. In a current SiFo project is investigated whether this naturally occurring male sterility for the biological Confinement suitable.

In addition, there are now various genetic engineering approaches to specifically suppress pollen formation. In all approaches, two methodical steps have to be combined:

Male sterile plants were developed in the 1990s by the Belgian company PGS (Plant Genetic Systems) using the Barnase / Barstar system. At that time it was about being able to breed simple hybrid seeds via sterile plants. Genetically modified oilseed rape, which was developed using this concept, has been grown in North America for many years. In Europe, a rapeseed line is currently approved under the designation MS8 / RF3, which, in addition to herbicide resistance to the active ingredient glufosinate, also has the PGS sterility system.

Example 1: Switching off an anther-specific enzyme

One genetic engineering approach deals with the inhibition of an enzyme called invertase, which is essential for pollen development. It is an anther-specific invertase that splits sucrose (table sugar, a disaccharide) into the simple sugars fructose and glucose, two carbon sources that are important for pollen development. Without the breakdown of the sucrose, the nutritional basis of the pollen is withdrawn and it cannot develop fully: the plant is sterile.

To limit or switch off the activity of invertase, two methods can be used: With the help of the antisense technique, the gene responsible for the invertase can be "switched off", with an invertase inhibitor the effect of the enzyme is directly blocked.

In a SiFo project completed in 2008, the two methods described were applied to the crops of rape and maize and, in the case of rape, male sterile plants were successfully produced.

The natural mechanism of RNA interference is used here. The genetic “building instructions” for the formation of a protein (in this case the enzyme invertase) are read at the corresponding point in the genome and a copy (here: mRNA, marked in blue) is transported to the “protein factories” of the cells, the ribosomes. This process can be suppressed with the help of special gene constructs (here: antisense DNA, marked in red). So that this only happens in those cells that are responsible for pollen development, the antisense construct - such as the invertase gene - is provided with a tissue-specific promoter.

The activity of enzymes can be inhibited by substances whose chemical structure is similar to the actual substrate - they too can bind to the enzyme, but are not processed. With specific "inhibitors", the respective enzyme can be blocked in a targeted manner. If the development of pollen is prevented, the pollen-specific invertase (here: blue), for example, can be blocked with a substrate similar to sucrose (here: red). If the gene for the invertase inhibitor is introduced into a plant, it forms the inhibitor and thus blocks the invertase: pollen formation is inhibited.

The targeted expression of cell toxins - for example only in the anthers (anthers) - can also very effectively inhibit pollen formation. Sterility systems based on a newly introduced gene from the bacterium Bacillus amyloliquefaciens have been successfully developed in several types of culture. The toxic effect is caused by a special enzyme (barnase) that cuts the RNA molecules in the cells. However, so that only the male parts of the flower are affected by this effect, the toxin gene is linked to a genetic switch (promoter). This switch activates the gene only in certain cells that are necessary for the development of the male part of the flower. This means that no pollen is formed on the stamens (anthers). 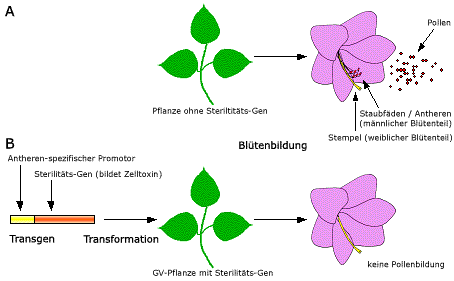 In a current SiFo project, based on a previous project, various gene constructs for inhibiting pollen formation based on cell toxins are being tested in the quivering aspen. Among other things, the barnase gene is also used.