Darkened sky: One of the densest dust storms ever observed is looming on Mars. The dust is already covering around a quarter of the planet and it could turn into a global dust storm - it would be the first since 2007. The NASA Mars rover Opportunity has already switched itself off due to a lack of light. For planetary researchers, however, this is the perfect chance to explore the Martian dust storms with three orbital probes and the Curiosity rover.

On average every three to five years, the normally more regional dust storms of Mars spread to almost the entire planet. The fine, reddish dust then covers a large part of the surface of Mars. Contrary to the scenes in the film The Martian, the Martian winds have little force because of the thin atmosphere, but the fine dust covers solar panels of rovers, disrupts the electronics and absorbs a large part of the sunlight. In 2007, the two rovers Spirit and Opportunity had to be temporarily shut down due to such a storm.

However, it is still unclear when a regional Martian storm will develop into a global phenomenon - also because there is a lack of data. Since the last big dust storm in 2007, planetary researchers have been waiting all the more eagerly for a new one to loom. Because: There are now so many probes orbiting the Red Planet that there is for the first time the opportunity to research the development and behavior of such a storm in all details.

Exactly this opportunity could now be offered. Because at the end of May a regional dust storm formed over Arabia Terra, a region north of the position of the Opportunity Rover. According to NASA, it is one of the densest storms ever observed on the Red Planet. 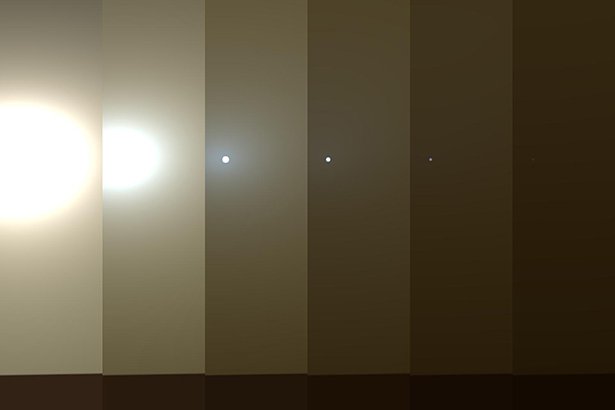 Opportunity would currently see its surroundings as dark as on the far right - if it weren't for the fact that it wasn't switched off due to lack of light. © NASA / JPL-Caltech / TAMU

The so-called Tau value, a value that indicates the obfuscation of the atmosphere, has already risen to 10.8 at the Opportunity location - almost double that of the last great Mars storm in 2007. Even the Mars rover Curiosity, the one on the other side of the planet has already noticed a clouding of the atmosphere. Its dew value also increased and the rover's camera sent images to Earth that clearly show the surrounding area has been darkened.

Is this storm going global?

Since then, the Mars storm has grown steadily - and continues to grow. It now covers around 35 million square kilometers and thus around a quarter of the red planet. NASA researchers believe it is entirely possible that this dust storm will expand into a planet-spanning event. In this case, the Curiosity rover in the Gale crater would also be affected. However, because it gets its energy primarily from a thermoelectric radioisotope generator, it is independent of sunlight.

A global storm on Mars would be a great opportunity for science: "Every observation of these major storms brings us closer to a model of such events - and then one day perhaps even enables us to predict them," explains Rich Zurek of NASA's Jet Propulsion Laboratory. This would be particularly important if human astronauts are to be on Mars.

If this storm actually spreads further, NASA is prepared: three orbital probes could then collect data on the Martian dust veil: the Mars Reconnaissance Orbiter (MRO) provides weather data and images similar to terrestrial weather satellites, the Mars Odyssey probe can measure the dust density with its infrared camera and condition and the MAVEN probe analyzes the behavior of the upper atmosphere during the storm.

"This is the ideal storm for Mars exploration," says Jim Watzin of NASA. - "We have a historic number of space probes currently operating on the Red Planet - and each offers us a unique view of how such dust storms form and how they behave."