Tourists to Canada get traveler's diarrhea

Traveller's Diarrhea: Which Are the Highest Risk Countries? 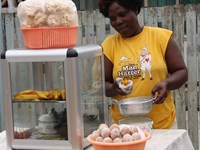 Traveller's diarrhea is still the most common unwanted souvenir for vacationers. The pathogens are different and are mostly ingested through contaminated food or drinks. These are bacteria such as Campylobacter, Salmonella, Shigella, E. coli or viruses or unicellular cells such as Giardia and Cryptosporidia.

Countries with high rates of illness among travelers are Egypt, India, Thailand, Pakistan and Morocco

The choice of travel destination affects the risk. The risk of transmission is low in Western Europe, the United States, Canada, Australia, New Zealand and Japan, while the risk is already increased in Southern Europe, Israel, South Africa, the Caribbean and Pacific Islands. It is highest in Asia, the Middle East, Africa and Latin America. It is estimated that between 20-60% of all travelers to areas at highest risk will develop traveler's diarrhea. The countries in which traveler's diarrhea is most common are mainly Egypt, India, Thailand, Pakistan and Morocco.

Different travel factors determine the risk. In addition to the travel destination, this also includes accommodation and food at the travel destination. Children and the elderly are most likely to get sick, as well as those with underlying chronic diseases. The most common causes are contaminated food and beverages. The typical symptoms are thin diarrhea that occurs within about 24 hours. It is not uncommon for abdominal cramps and nausea with an occasional low rise in temperature. Vomiting is rare. Most of the time, infection occurs during the first week of travel. The traveler's diarrhea usually lasts three to four days. In rare cases it can last longer than a month.

Make sure that you drink enough fluids

In the event of an infection, it is important to ensure that you drink enough fluids, as the diarrhea causes the body to lose a lot of water and there is a risk of an imbalance. In any case, medical help on site should be sought if possible in order to rule out other causes. Malaria can sometimes start with similar symptoms.

Food and drinking water hygiene should be observed

Most important is careful food and drinking water hygiene. Preventive measures also include protecting the stomach from getting cold (e.g. by using air conditioning at night), avoiding cold drinks, ice cubes, open water and juices (especially at street kiosks), salads, spicy dishes and seafood. Especially at the beginning of the trip you should slowly adjust to the new and unfamiliar foods. Overeating or drinking can lead to a breakdown of the gastric acid barrier, which in turn can lead to unpleasant diarrhea.